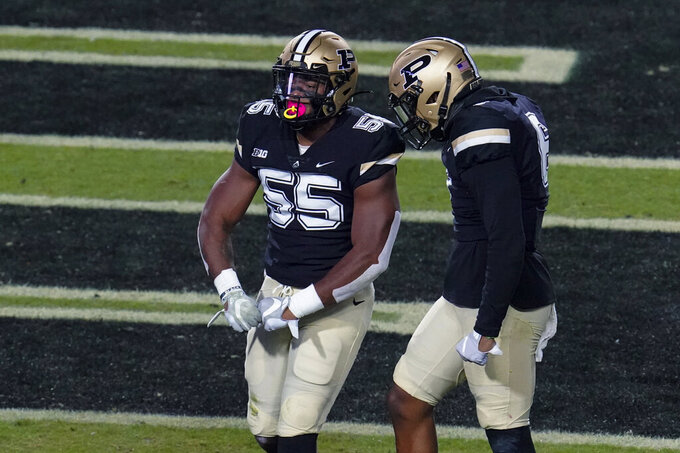 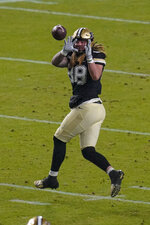 He used nimble feet to evade pass rushers, remained poised under pressure and kept Northwestern moving down the field. The Wildcats needed a solid performance from the fifth-year senior, and they got it.

Ramsey made up for a stymied rushing attack by throwing for 212 yards and three touchdowns, leading No. 23 Northwestern to a 27-20 victory over Purdue.

“I don’t want to speak for him, but man, it seems like he’s having a lot of fun,” said coach Pat Fitzgerald, who played on the last Wildcats team to start 4-0 in league play in 1996. “I don’t know what it looks like on TV, but on the boundary, this guy is awesome."

The Boilermakers have seen enough of seeing Ramsey in the past two seasons.

Ramsey finished 23 of 36 with one interception and hooked up with Ramaud Chiaokhiao-Bowman on all three scores. The graduate transfer also ran six times for 21 yards, routinely extending plays while improving to 8-4 as a starter over the last two years.

“That’s what he’s known for,” Purdue linebacker Derrick Barnes said, referring to Ramsey's mobility. “We have to do a better job against those types of quarterbacks.”

The Wildcats defense was strong yet again. It held Purdue to 2 yards rushing and made two late stops to preserve a fifth straight Big Ten win.

But Ramsey was the biggest key — right from the start.

He completed all seven passes on the ensuing drive, the last to Chiaokhiao-Bowman for an 18-yard score that gave Northwestern a 17-10 halftime lead. Chiaokhiao-Brown finished with eight catches for 86 yards, helping make up for a running game that managed 80 yards on 40 carries.

“When Peyton made the decision to come here, he and Ramaud were in constant communication,” Fitzgerald said. “That’s what older leaders do.”

Ramsey cashed in again with a 5-yard TD pass to Chiaokhiao-Bowman after Northwestern (4-0, 4-0) recovered O’Connell’s third-quarter fumble. And then he burned more than six minutes of clock time while setting up a 42-yard field goal for a 27-13 lead.

Northwestern: A stifling defense and a solid ground game will keep the Wildcats atop the Big Ten West Division for at least one more week. But if Ramsey and Chiaokhiao-Bowman continue to be as productive as they were Saturday, Northwestern could become a serious contender.

Purdue: The Boilermakers defense played better than expected and might have played well enough to win. But coach Jeff Brohm said earlier this week he didn't like having last week's unscheduled bye because he thought it might throw the offense out of sync. It sure looked like it, especially early.

This week, the Wildcats made their first Top 25 appearance since the final poll in 2018. They should stay there at least one more week and could climb a few spots, too.

Purdue hasn't been ranked since early October 2007 and this loss won't end the longest active drought among Power 5 conference teams.

Rondale Moore, Purdue's All-American receiver, missed his fourth consecutive game but the Boilermakers still have not said why he is out. Moore also missed the final eight games of last season with a hamstring injury. He hasn't played in nearly 14 months.

Northwestern hosts No. 13 Wisconsin next Saturday in another crucial division showdown.