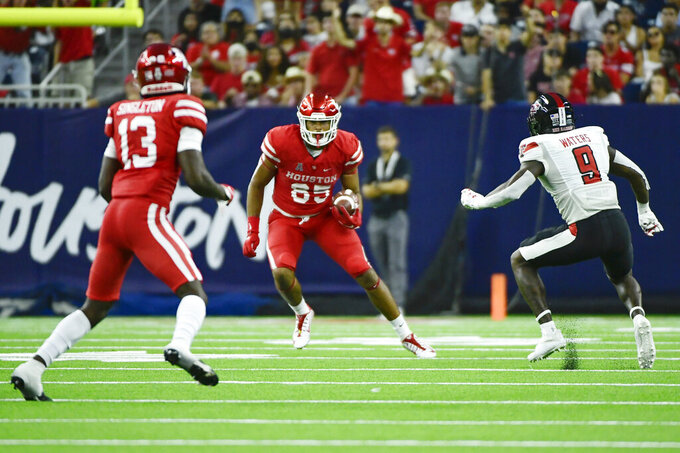 Houston tight end Christian Trahan (85) runs with the ball against Texas Tech during the first half of an NCAA college football game Saturday, Sept. 4, 2021, in Houston. (AP Photo/Justin Rex) 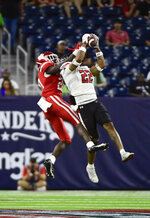 Shough finished 17 of 24 for 231 yards passing with a touchdown and ran for another score in his debut for the Red Raiders. The Oregon transfer scored on an 8-yard touchdown run with eight minutes left in the third quarter to start a streak of 31-unanswered points for Texas Tech.

“He saw what he needed to see and communicated it clearly,” Wells said. “He was calm. … He was accurate and scrambled a little bit. I think the sky’s the limit for him.”

Erik Ezukanma had seven catches for 179 yards for Texas Tech, which outgained Houston 376-251.

Houston’s Clayton Tune finished 27-of-38 passing for 174 yards and two touchdowns but was intercepted four times. Nathaniel Dell caught seven passes for 80 yards and a touchdown.

“We didn’t do a very good job in the second half from an offensive perspective,” Houston coach Dana Holgorsen said. “That’s one of the worst halves I’ve ever been apart of. I admit that; I own that; and we’ll work hard on trying to fix that.”

Texas Tech tied it at 21 with 7:20 remaining in the third quarter when Riko Jeffers scored a touchdown on a 13-yard interception return. Jonathan Garibay hit a 34-yard field goal to give the Red Raiders a 24-21 lead with 36 seconds left in the third.

“The first half we hurt ourselves,” Jeffers said. “We had some blown coverages that we made mistakes on. We corrected it in the locker room, talked to our coaches and communicated better in the second half. That’s why we did what we did in the second half.”

Xavier White caught a 3-yard TD pass from Shough, and Brooks, who had a 41-yard score in the second quarter, rushed for a 44-yard TD with a minute remaining to ice it.

“That game was a tale of two halves,” Wells said. “I was proud of our players for the way they came out of the halftime, resiliency and never once wavered. They stayed together, they played together and to go on the run they did in the second half, my hats off to these players.”

Tune capped a 16-play, 75-yard drive with a 1-yard quarterback sneak to give Houston a 7-0 lead with 6:30 remaining in the first quarter. After the Cougars recovered an onside kick, Tune found Dell wide open in the end zone for a 23-yard touchdown to expand Houston’s advantage to 14-0 with two minutes left in the first.

Tune connected with Seth Green for a 9-yard TD pass with 23 seconds left in the second quarter to give the Cougars a 21-7 halftime lead.

“We got more pressure on the quarterback in the second half,” Wells said. “I think we tightened the screws down in the secondary a little bit. Riko’s pick six I think was a big momentum play for us.”

Houston: The Cougars struggled in the run game, with 87 yards rushing, but 49 of it coming from their running backs. Houston went 5 of 15 on third downs, including 1 of 7 in the second half.

Houston went for it three times on fourth down in its first drive, converting each time. Each of the fourth-and-1 plays were runs, with Tune converting twice and Mulbah Car converting the third. Houston used that aggressiveness and the ensuing onside kick to hold the ball for the first 13 minutes of the game. Texas Tech took its first snap with 2:04 remaining in the quarter.

“We were up, and I felt good about the momentum,” Holgorsen said. “(The onside kick) was there. We play to win, and it worked and got us the lead.”

Houston: The Cougars will travel across town to face rival Rice on Saturday.