Sitake's positive approach has No. 19 BYU on the rise 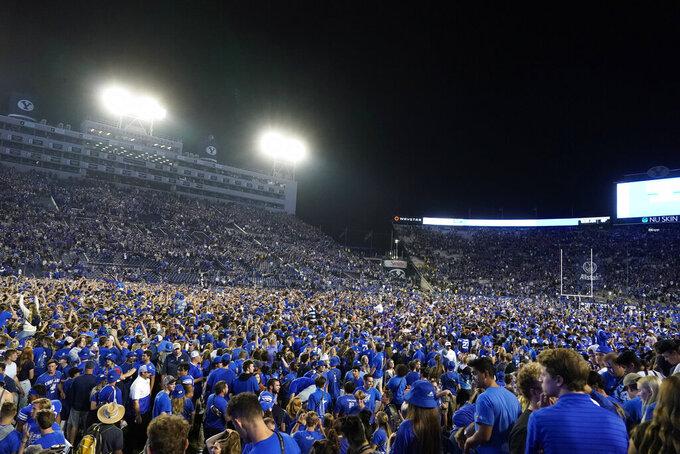 There was a time when Kalani Sitake let guilt, shame and embarrassment get the best of him.

The former BYU player and current head coach made a conscious decision a few years back to be more positive, embrace the good things in life, turn adversity into an opportunity for growth.

The mindset shift changed Sitake's life and the trajectory of his alma mater as the No. 19 Cougars prepare for a jump to the Big 12.

“I’d rather live a life of gratitude and appreciation and positivity because it’s a lot more fun,” Sitake said. “I can run the team the same way. I think it works. And I think it’s refreshing and helps build team character.”

Sitake was a three-year starter at fullback under coach LaVell Edwards and went into coaching after a potential professional career was derailed by injury. After 15 years as an assistant, including a stint as Oregon State's defensive coordinator, Sitake got the opportunity to coach his alma mater in 2016 after Bronco Mendenhall left for Virginia.

Sitake took over a program that was in solid shape, making 11 straight bowl appearances. The Cougars kept the streak alive in Sitake's first season, but went 4-9 his second season as the affable coach tried to reshape the program in his image.

Sitake and the Cougars have been on the rise ever since.

BYU put itself in the College Football Playoff conversation by going 11-1 in the pandemic-affected 2020 season and went 10-3 last year. The Cougars opened this season with a win over South Florida and outlasted then-No. 9 Baylor 26-20 in double overtime on Sept. 10 for their first home win over a top-10 team since 1990.

BYU was down several key players due to injuries and lost 41-20 at No. 15 Oregon last weekend, but sits at No. 19 in the AP Top 25 heading into Saturday's game against Wyoming.

“It's the culture the coaches have set,” said BYU offensive lineman Clark Barrington, in his fourth season playing under Sitake. “They do a good job of preaching to us love and learning and continually getting better every day. When we do have so many guys that have played together for so long, the continuity and the flow and just the chemistry that we create between each other, that just helps us to play better.”

BYU is a unique program in college football because it is owned and operated by The Church of Jesus Christ of Latter-day Saints. Players are not required to serve two-year missions, but most do, so Sitake and his staff have to have an eye on their roster farther into the future than other coaches.

BYU has added a few key transfers through the years, but the majority of the roster is filled with players Sitake and his coaches recruited to Provo, Utah.

“We’ll try to find ways to add to our roster, but there’s got to be a great fit for school and for the academics, and definitely for our football team culture,” Sitake said.

The common perception is that the two-year missions help BYU because the roster is often filled with older, more mature players.

It's true — to a certain degree.

The players do come back from missions with added maturity, both from age and the worldly experience. But the time away erodes some of their physical abilities, so BYU's coaches have to gradually work them back into the mix.

The first FBS head coach of Tongan descent, Sitake holds his players to high standards and does not hesitate to hold them accountable for their mistakes. But he's also the first person to congratulate and celebrate with them for successes big and small, even breaking out into dances on the sideline and in the locker room.

“That energy he brings, it’s contagious and then it just spreads like wildfire throughout the rest of the team,” Barrington said. “That energy helps us to have great energy on and off the field.”