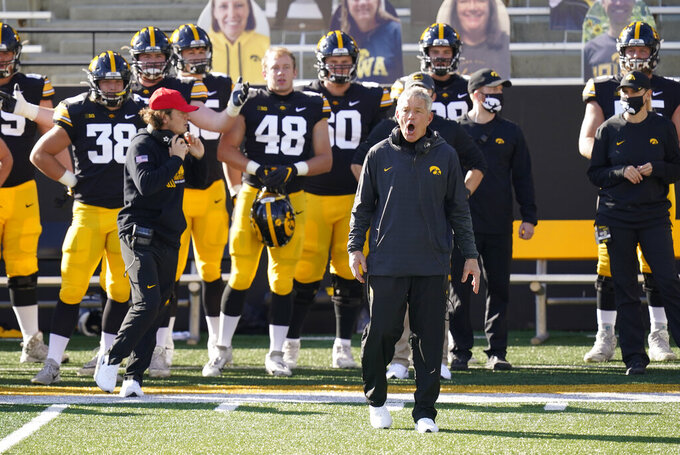 Fresh off a surprising win over its in-state rival, Michigan State heads into its game at Iowa on Saturday feeling a lot better about itself than it did two weeks ago.

The Hawkeyes, on the other hand, are looking for answers after their first 0-2 start since 2000.

“Nothing about that feels good,” Iowa coach Kirk Ferentz said. “But our focus and encouragement to our players is to focus on the remaining 80% of the season. There’s a lot of football left, and all of us know that we need to play better.”

Mel Tucker took over for Mark Dantonio this year, and it looked as if the Spartans would have a long slog after they committed seven turnovers and lost 38-27 at home to conference doormat Rutgers in the opener.

Michigan State rebounded with a 27-24 road win over then-No. 13 Michigan, with Rocky Lombardi throwing for a career-high 323 yards and freshman Ricky White breaking out with eight catches for 196 yards and a score.

“I’m proud of that, that Spartan Nation is pleased and excited about our program and about our win against the school down the road and bringing that Paul Bunyan trophy back to East Lansing,” Tucker said. “That’s a source of pride for all of our fans and all of our supporters. I made sure our players knew how I felt about it, that when you play the school down the road, that is the game every year, so we embrace that.”

The Hawkeyes also need to have short memories after opening the season with losses at Purdue and at home to Northwestern.

“We can’t dwell on the last week,” center Tyler Linderbaum said. “All the guys have forgotten about it and all we can do is move on to Michigan State — just keep winning the weeks, winning the days, and if we do that we might get the outcome we want.”

Iowa receiver and kick returner Ihmir Smith-Marsette, arrested on suspicion of drunken driving last Sunday, was suspended for the game. He spent the week practicing with the scout team and should be back next week against Minnesota. Ferentz said Tyrone Tracy, who started eight games last season, would play most of the snaps that would have gone to Smith-Marsette.

Lombardi grew up 120 miles west of Iowa City in the Des Moines suburb of Clive. He was a standout for Valley High and declined a scholarship offer from Ferentz to sign with Michigan State, then coached by Mark Dantonio.

The Hawkeyes scored a combined three points in the second halves of their first two games, committing four turnovers on 12 possessions.

Iowa is looking for more balance. Spencer Petras attempted 51 passes against Northwestern, the most since Jake Rudock threw 56 times against Maryland in 2014. The Hawkeyes ran only 23 times for 77 yards against the Wildcats.

GOING FOR 3 IN ROW

With a win, Michigan State would tie the series 23-23-2 and pick up its third straight victory in Iowa City. The last time the Spartans won three in a row on the Hawkeyes' home field was in 1973, ‘75 and ’77.