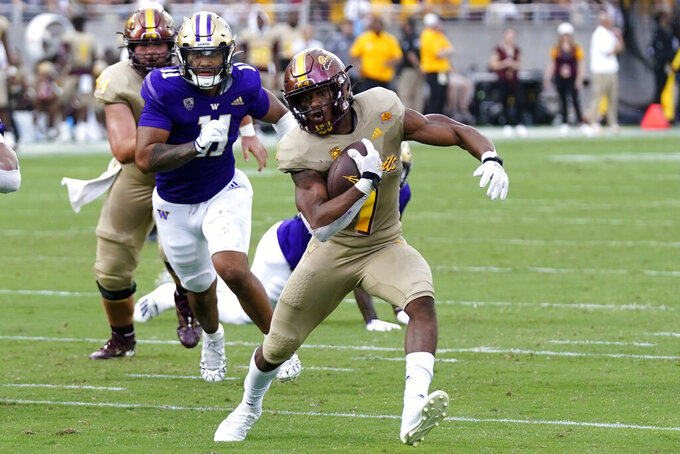 Line: Stanford by 2 1/2, according to FanDuel SportsBook.

Both teams are trying to get on track in conference play. Stanford snapped an 11-game losing streak against FBS teams by beating Notre Dame 16-14 last week. But the Cardinal have lost a school-record 10 straight conference games. Arizona State is coming off an open date and is looking for its second conference victory.

Arizona State QB Emory Jones vs. Stanford secondary. After a few weeks of going back and forth with their top two quarterbacks because of injuries, the Sun Devils have decided on the more experienced Jones. Jones is one of the Pac-12’s top QBs and is completing 63.6% of his throws. Stanford counters with the conference’s No. 2 pass defense, surrendering 212.3 yards per game.

Arizona State: RB Xazavian Vallady is averaging 94.3 yards per game. He ran for 111 yards and a touchdown and also caught a TD pass in the Sun Devils' win over Washington before the open date.

Stanford: QB Tanner McKee has passed for 1,557 yards, 10 touchdowns and four interceptions. Notre Dame held him without a touchdown for the first time this season.

Stanford’s win against Notre Dame was its first against an FBS team since Oct. 2, 2021. … The Cardinal returned all five starting offensive linemen from 2021 but due to injuries have used four different combinations already this season. ... Stanford is 82-8 under head coach David Shaw when leading at halftime. Shaw is five wins shy of 100 for his career.