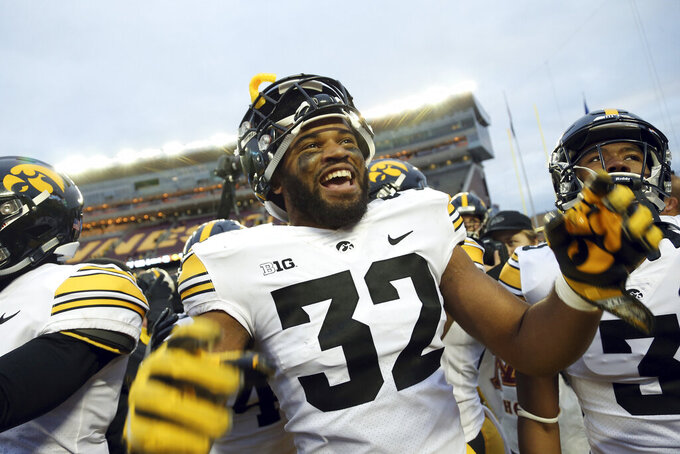 Iowa's Djimon Colbert celebrates after his team's 48-31 win against Minnesota after an NCAA college football game Saturday, Oct. 6, 2018, in Minneapolis. The death of George Floyd followed by revelations of mistreatment of Black players in the Iowa football program prompted Djimon Colbert to confront important issues he had mostly put to the side before this summer, Thursday, July 16, 2020. (AP Photo/Stacy Bengs)

IOWA CITY, Iowa (AP) — The death of George Floyd followed by revelations of mistreatment of Black players in the Iowa football program prompted Djimon Colbert to confront issues he had mostly put to the side before this summer.

Colbert joined Hawkeyes teammates in protests in downtown Iowa City last month, and he's found his voice as a member of the team's 21-player Leadership Group.

“For me personally, it's been super liberating,” Colbert said Thursday. “Being a Black athlete here, you kind of don’t get to face these issues first-hand because you’re more focused on school and your sport. To be able to get out there and fight for what my ancestors and people before me were fighting (for), I felt it was kind of my responsibility.”

It's been six weeks since former Iowa offensive lineman James Daniels, now with the Chicago Bears, became the first to criticize the Iowa staff’s treatment of players. Dozens of former players followed with social media posts about racial bias inside the program, particularly verbal abuse by strength coach Chris Doyle and others.

Black players complained of an uncomfortable atmosphere in the football facilities, and some said they were criticized for how they wore their hair and dressed.

The university hired a Missouri law firm, Husch Blackwell, to conduct an independent review of the allegations. Kirk Ferentz said about 100 staff and former and current players have been interviewed.

James Daniels' allegations came less than two weeks after Floyd’s death while in police custody in Minneapolis, sparking civil unrest across the country.

Colbert said he and teammates felt compelled to raise their voices.

“It was some crazy times,” he said of getting teargassed at the Iowa City protests. “It’s kind of a reflection of the world today. It shows there are these issues we’re fighting, and we’re not fighting them for no reason. The only way to go is to make progress.”

The linebacker from Shawnee Mission, Kansas, said he's seen positive developments at Iowa. Kirk Ferentz has taken steps to make the program more inclusive, and players have discussed their concerns in team meetings.

“That was important for guys who don’t have to face the issues that Black players have to face on the team," Colbert said. "They really don’t know first-hand some of the things that happened to players here.”

One of those guys is Tyler Linderbaum, who grew up nearby in Solon, population 2,600.

“Obviously, I grew up different from a lot of my teammates,” said Linderbaum, who is white. “It was really eye-opening. It was an experience you’ve never been through, especially me being from Solon, Iowa. It's a unique conversation and I'm glad my teammates spoke up.”