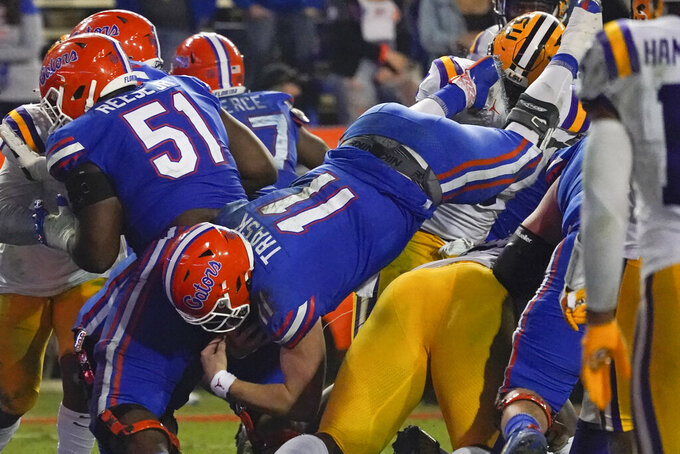 Florida quarterback Kyle Trask (11) dives over the LSU defense for a 1-yard touchdown during the second half of an NCAA college football game Saturday, Dec. 12, 2020, in Gainesville, Fla. (AP Photo/John Raoux)

GAINESVILLE, Fla. (AP) — There were no shortage of eye-popping moments in this LSU-Florida game. Cade York's 57-yard field goal. Marco Wilson's inexplicable shoe toss. The dense fog that rolled in late and covered the Swamp. Kyle Trask's three turnovers in the second quarter, including maybe the wackiest interception ever.

For the Tigers, those will be fond memories.

For the Gators, they will be nightmares.

Max Johnson threw three touchdown passes in his first college start, York delivered the kick of his life with 23 seconds remaining and reigning national champion LSU stunned No. 6 Florida 37-34 on a cool and foggy Saturday night in the Swamp.

York drilled his kick through the eerie elements and the uprights after an unsportsmanlike conduct penalty against Florida's Wilson, who threw tight end Kole Taylor's size 14 shoe following a third-down stop. LSU would have punted. Instead, the Tigers got a first down and moved into York's long-distance range.

“I don’t think I’ve ever been in a game where an opponent threw a shoe, to be honest with you," LSU coach Ed Orgeron said.

Not many have. The kick was a rarity, too, especially since York could barely see the goal posts.

“It was a little blurry,” he said. "It went down the middle, right?”

The Gators (8-2) had a final shot, and Trask got them in position to tie. But Evan McPherson was wide left from 51 yards on the final play. LSU (4-5) celebrated wildly all over the field.

“We had an easier one than they did. We just missed it,” Florida coach Dan Mullen said.

Johnson had a lot to do with the outcome. The son of former Super Bowl champion Brad Johnson repeatedly torched Florida’s beleaguered defense. He threw for 239 yards, nearly half of them (108) to Kayshon Boutte, and ran for 52 more.

“Boy, his confidence was incredible," Orgeron said. “I think Max is going to be a championship quarterback.”

Johnson got a hug and a kiss on top of his head from his father, who walked down to the first row and leaned over the wall to reach his son. Teammates were still dancing and screaming all around.

Florida didn’t help itself with three turnovers in the first half that led to 10 points and a 24-17 deficit.

“You can't win doing what we did tonight, no matter what's going on and who you're playing,” Mullen said. “Minus-three turnover ratio, we don't score touchdowns in the red zone, we can't make key stops when we need to defensively and we lose the special teams part of the game.”

Trask accounted for four touchdowns and all three turnovers, first putting his teammates in a hole and then helping them climb out of it. But he was unable to rally the Gators when it mattered.

He ran for two touchdowns and threw for two more, including his record-setting 40th of the season. He passed 1996 Heisman Trophy winner Danny Wuerffel for the most in a single season in school history. Wuerffel called Trask after the game and reminded him that the Gators lost their regular-season finale in 1996 before rebounding to win it all.

“It's just one foot in front of the other, you know, and that’s what we plan on doing next week,” Trask said.

For most of the game, though, Trask looked nothing like the Heisman Trophy front-runner. The Gators looked even less like a team capable of upsetting the Crimson Tide next week in Atlanta in the Southeastern Conference title game with a College Football Playoff spot at stake.

Barely able to field a team because of injuries, opt-outs and COVID-19 testing and contract tracing, the Tigers forced Trask into a fumble and two interceptions in a first half that morphed what was supposed to be a tune-up into a meltdown.

The Gators had offensive lulls, defensive lapses and little to no edge on Senior Night.

They were 23-point favorites at kickoff. But LSU made more plays from start to finish. Trask’s turnovers were the difference.

He fumbled trying to scramble with 10 seconds to play in the half, essentially handing LSU a field goal. He also had an interception returned for a touchdown.

The third one cost the Gators points. Florida had first-and-10 at the LSU 15-yard line when Trask tried to connect with Kadarius Toney near the sideline.

Toney tipped the ball with his right hand. It ricocheted off Dwight McGlothern’s facemask right before he stepped out of bounds. And then Jay Ward was aware enough to get his hands back inbounds and catch the ball while on his knees.

It contributed to Florida’s worst quarter, worst half and worst loss of the season.

LSU: The Tigers may have settled on a quarterback, with Johnson showing glimpses of being a long-term solution at the all-important position. Surely, hiss first start won’t be his last.

Florida: The Gators have all kinds of issues heading into the title game. No one will give Florida a chance against Alabama.

The Gators surely will tumble in the next AP poll and in the CFP rankings.

LSU: Will attempt to host Ole Miss next Saturday. But the Tigers are precariously close to not having enough scholarship players to meet the league’s minimum threshold (53).

Florida: Faces Alabama for the 10th time in the league title game. It’s the most common matchup since the showcase event began in 1992. The Crimson Tide hold a 5-4 advantage, including three straight wins.