Trap game? No. 14 Florida trying to avoid letdown vs Vandy 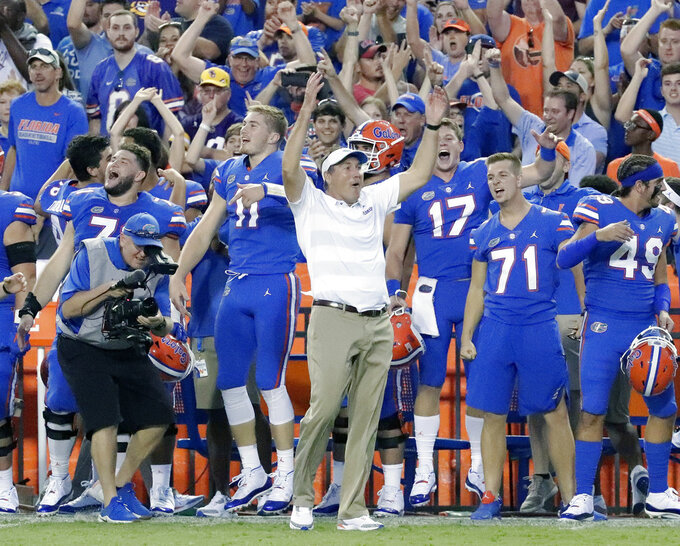 FILE - In this Oct. 6, 2018, file photo, Florida head coach Dan Mullen, center, celebrates with players on the sidelines during the final moments of an NCAA college football game against LSU, in Gainesville, Fla. Mullen opened his first team meeting this week talking about handling success. He'll find out Saturday if anyone was paying attention.(AP Photo/John Raoux, File)

He'll find out Saturday if anyone was paying attention.

Coming off the program's most significant victory in three years and with a rivalry game against No. 2 Georgia looming in two weeks, the 14th-ranked Gators are facing the sometimes-daunting task of avoiding a letdown at Vanderbilt.

"We won, so guess what, Twitter's going to tell you how great we are," Mullen said. "If you like being told how great you are, get back to work and let's win again, OK? If you'd rather be told that you're no good and you stink, well then you don't have to work very hard and everyone will tell us we won't win the game and then everybody will tell us how bad we are.

Florida (5-1, 3-1 Southeastern Conference) has won four straight since losing at home to Kentucky, none bigger than last weekend's 27-19 victory against then-No. 5 LSU. It's the team's longest winning streak since a 6-0 start in 2015 that included a lopsided win over then-No. 3 Mississippi.

The Gators have been up and down since.

If they want to keep going in the right direction, they have to find a way to get motivated for an 11 a.m. kickoff on the road against one of the five SEC teams without a league victory and in front of an expected crowd of about 30,000.

"We definitely understand," receiver Josh Hammond said. "We're going to treat Vanderbilt as a big game because it's the next game coming up. We've still got to be ready to prepare and treat it as if it's a national championship game and come out ready to practice and continue to get better.

Instead of focusing on how one-sided the series has been or that the Commodores lost their two conference games this season by a combined 51 points, Mullen pointed to how tough Vanderbilt has played Florida in the past.

The Gators shouldn't require much of a reminder since the last three games have been close. Florida needed a late field goal for a 9-7 victory in 2015 and three turnovers to win 13-6 the following year in Nashville. The Gators had a little more breathing room last year, but the 38-24 outcome was a one-score game until Malik Davis' late touchdown run.

"For our guys to have any thought except for how hard I can go on the next play would be us taking a step backwards as a team," Mullen said. "That has to be the focus of everybody within the program."