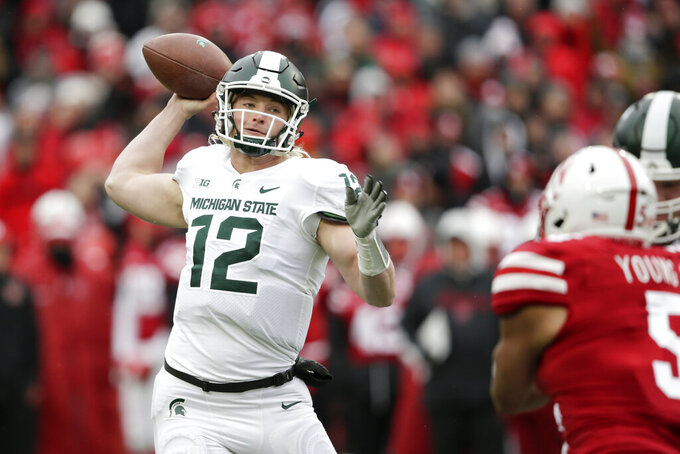 FILE - In this Saturday, Nov. 17, 2018 file photo, Michigan State quarterback Rocky Lombardi (12) throws a pass in front of Nebraska linebacker Dedrick Young II (5) during the first half of an NCAA college football game in Lincoln, Neb. Mel Tucker's success in his first season as Michigan State's coach may be determined in large part by who is playing quarterback. Lombardi made three starts at quarterback in 2018 as a redshirt freshman, and he threw for 173 yards and a touchdown in a win over Rutgers that year. (AP Photo/Nati Harnik, File)

Mel Tucker's success in his first season as Michigan State's coach may be determined in large part by who is playing quarterback.

Right now, there's no indication of who that's going to be.

“We won't be announcing a quarterback today," Tucker said Tuesday, four days before the Spartans open the season against Rutgers. "There's been furious competition at so many positions, including quarterback, and so as this week unfolds and a game plan is installed, we'll make a decision, and then we'll go play.”

Tucker took over after Mark Dantonio's retirement in February, and he inherited a program rife with uncertainty after some mediocre results over the past four years. The quarterback spot is just one glaring area that must be resolved. Gone is Brian Lewerke, who started 38 games and became the school's career leader in total offense.

Tucker also said he probably wouldn't release a depth chart early this week, and he didn't offer much detail when asked if the team might play more than one quarterback to start the season.

“We're going to play who gives us the best chance to win. We'll just have to see how this week unfolds,” he said. "Obviously, the guys that we have are very capable, so we're very fortunate to have multiple quarterbacks that we feel like can get the job done.”

Lombardi made three starts at quarterback in 2018 as a redshirt freshman, and he threw for 173 yards and a touchdown in a win over Rutgers that year. He attempted only 21 passes last season, however.

Day redshirted in 2018 and attempted just three passes in limited duty last year. Thorne is coming off a redshirt last year, and Kim is a true freshman from Virginia.

“Those guys, that's a really good group of guys, and Noah Kim has done a nice job for us. He's got a lot of talent,” Tucker said. “Jay Johnson is a veteran offensive coordinator, a veteran play caller, a veteran quarterbacks coach — played the position himself. For Rocky, Peyton, Theo and Noah, those guys, the most important thing was really to connect with Jay and understand his process, understand how he sees that position being played, and then learning the scheme.”

Chemistry between the quarterback and the rest of the offense is also important.

Tucker's resume has a defensive focus, and when he coached Colorado last season, he had a returning senior at quarterback in Steven Montez. He doesn't have that luxury now, and navigating the quarterback situation is a big early test for the new coach.

“I believe that your quarterback has to be your No. 1 competitor on your team — college or pro," Tucker said. "We have the competitive nature and the mental disposition in that room to be able to get the job done.”