Virginia hoping its defense can slow high-scoring No. 17 UNC 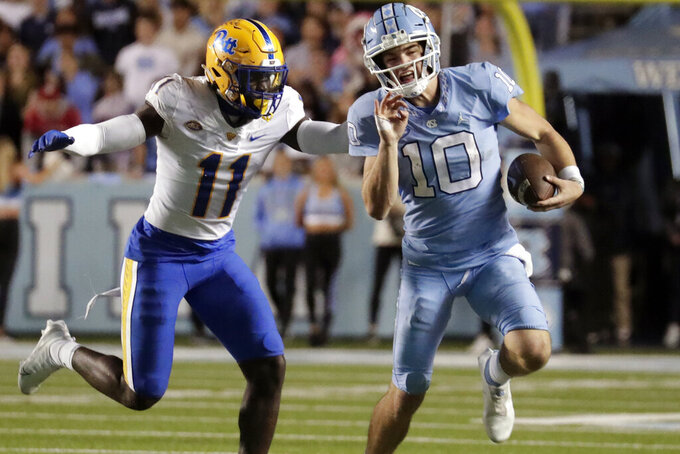 Line: North Carolina by 7 1/2, according to FanDuel Sportsbook.

The Tar Heels can start 5-0 in ACC play for the first time since 2015 with a victory. That year they were 8-0 in the conference and made their lone appearance in the ACC championship. Virginia is trying to bounce back from a 14-12 loss to Miami in which it managed just four field goals. They need to win three of four to qualify for a bowl.

UNC QB Drake Maye against the Virginia defense. The Cavaliers have not allowed an offensive touchdown in two games and had eight sacks in their 16-9 victory at Georgia Tech two weeks ago, but no one has seemed to slow Maye. He's thrown for 29 touchdowns and has just three interceptions.

North Carolina: WR Antoine Green. Josh Downs is the Tar Heels' top receiver with 48 catches and seven touchdowns, but Green has emerged in the last two games as a threat to penalize spending too much attention to Downs. In victories against Duke and Pittsburgh, he's caught 14 passes for 292 yards with three touchdowns.

Virginia: LB Chico Bennett Jr. He leads the ACC with seven sacks, six of them solo. Along with ACC tackles leader Nick Jackson, Bennett will have a huge role in trying to prevent Maye from continuing to light up the scoreboard.

The game has long been billed as the south's oldest rivalry, and only Minnesota and Wisconsin (131 meetings) have played more frequently in the Bowl Subdivision. ... UNC coach Mack Brown has a 4-9 career record against Virginia. ... The Tar Heels won 59-39 last year in the highest scoring game in rivalry history. Virginia lost despite Brennan Armstrong throwing for 554 yards, the most ever allowed by UNC. ... The Cavaliers are in week two of a four-game homestand, the first for the program on four consecutive Saturdays since 1970.