Virginia Tech hangs on in wild finish at Virginia, 29-24 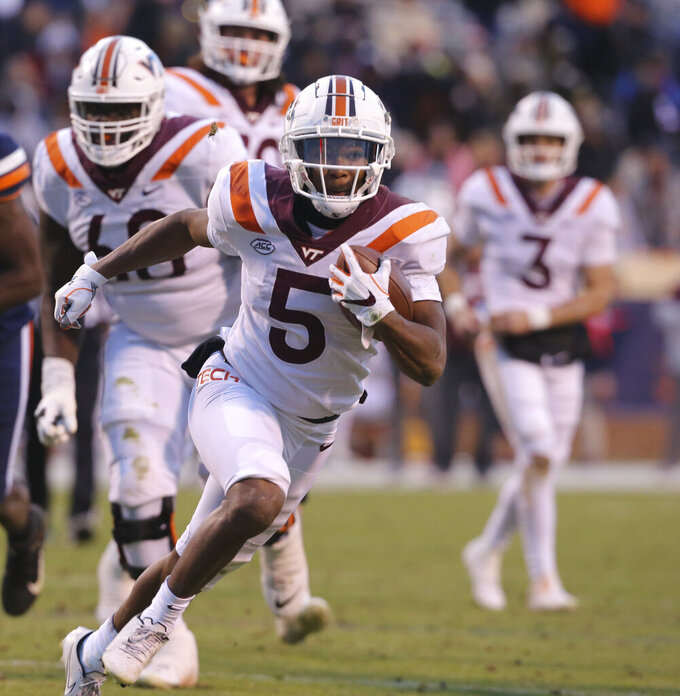 Virginia Tech running back Raheem Blackshear (5) runs for a touchdown in the first half of an NCAA college football game in Charlottesville, Va. Saturday Nov. 27 2021. (Matt Gentry/The Roanoke Times via AP)

CHARLOTTESVILE, Va. (AP) — J.C. Price hasn't masked his emotions or love for Virginia Tech since he was chosen to replace Justin Fuente as the Hokies interim coach early last week.

The former Hokies player was able to unleash them Saturday night, celebrating on the field with the Hokies, their fans and his family after a 29-24 victory at Virginia.

“I’m just so happy for these kids,” he said. “Yeah, somebody pinch me. I’m so happy, I don’t know whether to laugh, cry. It’s going to be a fun bus ride home.”

Braxton Burmeister threw for one touchdown, caught a pass for another and Virginia Tech ran for 320 yards and handed Virginia its fourth straight loss, 29-24.

Burmeister, who ran for 115 yards, hit Tayvion Robinson for a 61-yard touchdown and caught a 3-yard pass from Robinson on a double-reverse as the Hokies (6-6, 4-4 Atlantic Coast Conference) won for the 17th time in the last 18 meetings. They also achieved bowl eligibility for the 28th time in 29 years.

“I told them this week that there was no moral victory. We're either going to win or we're going to lose, and the kids found a way to win,” Price said.

Virginia (6-6, 4-4), limited to three second-half points, drove to the Virginia Tech 9 after recovering a fumble with just over 3 minutes left, but Brennan Armstrong's pass to Ra'Shaun Henry in the end zone on fourth-and 13 from the 14 with 35 seconds left fell incomplete, capping a wild final few minutes.

“A lot of times that's what happens in a close game or a rivalry game, and the team that makes the plays is the winner,” Virginia coach Bronco Mendenhall said.

When it was over, Hokies fans stormed the field, surrounding their team.

Raheem Blackshear lead the Hokies ground attack with 169 yards on 18 carries, including a 50-yarder, and Burmeister got his on just 12, including a 71-yard burst. The Hokies had three plays that covered at least 50 yards.

Oddly, in a game where both teams approached 500 yards of offense, Burmeister was stopped at the 3 on his long run and the Hokies failed to score, backup quarterback Connor Blumrick's fourth-down pass falling incomplete.

Armstrong had a strong first half, throwing for one touchdown and running for two more, but the Hokies defense limited Virginia to 172 yards after allowing 302 before halftime. Virginia Tech also recovered a fumble deep in its own territory and turned it into a field goal that tied the game at 24 with 9:31 left.

“Our kids tightened their chin straps,” Price said, insisting the Hokies' approach was no different after halftime than it had been before. “The kids just played a little bit harder.”

The ending was up in the air until the final minute when Armstrong's pass fell incomplete. He earlier lost the ball on a fourth down scramble, the ball rolling into the Virginia end zone where offensive lineman Bobby Haskins recovered, giving the Hokies a safety and the ball. Three plays later, Hokies quarterback Connor Blumrick was stripped by Nick Grant and Olasunkonmi Agunloye recovered for Virginia at the Cavaliers' 36, setting up the final fruitless drive.

The Cavaliers had four first-half possessions and three ended in touchdowns. The only one that didn't ended at Hokies' 38 on Tae Daley's interception. That led to an 18-yard scoring run by Blackshear that tied the game at 14.

The last two weeks have seen Virginia lose 48-38 at Pittsburgh, ending their chances to win the Coastal Division, and then lose to the Hokies. Again.

“It's a sour taste,” Armstrong said. “This was an important one to us.”

Virginia Tech: The Hokies' maligned defense bailed them out on Tae Daley's interception of a rare terrible throw by Armstrong with Virginia driving for a two-score lead in the second quarter, and by stiffening in the second half. But two defenders shied away from engaging with Jelani Woods on a TD catch and run and two more were run over by Armstrong on his second scoring run.

Virginia: Armstrong's efficiency and the Cavaliers offense have allowed them to get away with a very suspect defense all season, and untimely penalties have hurt mightily too. After West Weeks sacked Burmeister for minus 14 yards, setting up a fourth-and-22 for the Hokies from their 13, Weeks ran into punter Peter Moore on the next play, giving the Hokies a first down on a drive that ended in a field goal on the final play of the first half. Mendenhall said the instructions on the play were to try to block to punt, but not to hit the punter.

Hokies wide receiver Tre Turner did not play for most of the night, still dealing with a respiratory problem, but was dressed and fielded Virginia's onside kick after the safety. “He came to us and wanted to be out there,” Price said.

Both teams will await bowl invitations.