After taking down ND, No. 5 Cincinnati prepares for Temple 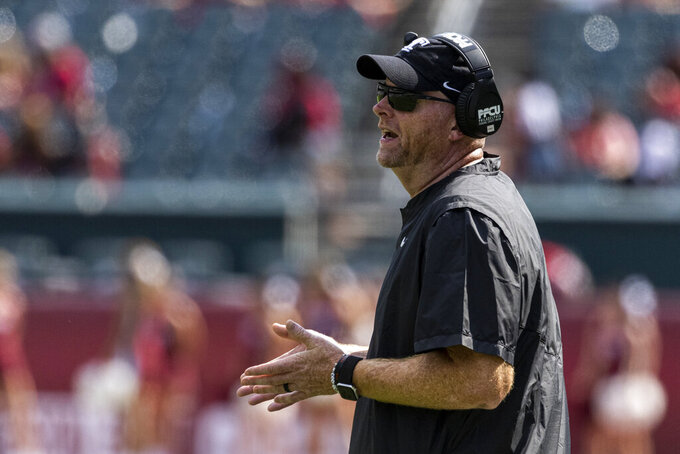 Temple coach Rod Carey speaks with a referee during of the second half against Boston College in an NCAA college football game on Saturday, Sept. 18, 2021, in Philadelphia. (Tyger Williams/The Philadelphia Inquirer via AP)

Line: Cincinnati by 29 1/2, according to FanDuel Sportsbook.

No. 5 Cincinnati is dreaming about a spot in the College Football Playoff after a huge win at Notre Dame on Saturday. But there is much more work to do. The Bearcats will be heavy favorites in their remaining eight games, including Friday night against Temple which has played them tough in recent years. In fact, the Owls are the last team to win at Nippert Stadium.

The Bearcats’ defensive line against Temple’s experienced offensive line. The Owls’ line had a combined 127 starts coming into this season, seventh-most in the nation, led by right tackle Michael Niese who has 38 career starts and center C.J. Perez who has 33. Cincinnati has six sacks this season, led by senior linebacker Darrian Beavers.

Cincinnati: Senior QB Desmond Ridder earned American Conference offensive player of the week honors after having 323 yards of total offense and three touchdowns (two passing, one rushing) in the win over Notre Dame. He led the Bearcats on a six-play, 75-yard touchdown drive capped by his six-yard TD run after the Irish had got within four points in the fourth quarter.

Cincinnati has won 30 straight games against unranked opponents. … The Owls lead the all-time series 13-8-1. … The Bearcats are one of only five teams to rank in the Top 20 in scoring offense and scoring defense, joining Georgia, Michigan, Auburn and Coastal Carolina. … A win on Friday would ensure Cincinnati has been in the AP Top 10 for 365 days. Cincinnati has been ranked in the Top 10 since slotting in at No. 8 on Oct. 11, 2020. … Temple currently ranks second in the American and eighth in the country in passing yards allowed per game (147.2). … Temple currently ranks 25th in the nation and third in the conference in tackles for loss per game (7.2).