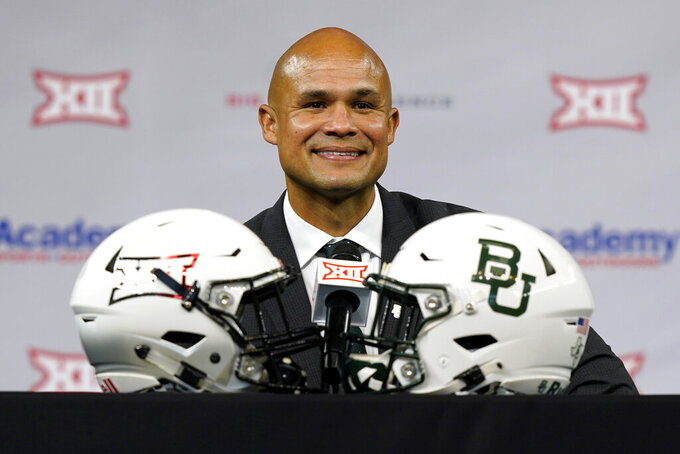 FILE - In this July 15, 2021, file photo, Baylor head coach Dave Aranda smiles as he listens to a question during an NCAA college football news conference at the Big 12 media days in Arlington, Texas. Aranda is going into his second season as Baylor’s head coach, and his first non-conference game. The Bears open their season Saturday night at Texas State. (AP Photo/LM Otero, File)

SAN MARCOS ,Texas (AP) — Gerry Bohanon just wanted to learn all he could while waiting for his chance to be Baylor’s starting quarterback.

After 3 ½ years on the Waco campus and being behind Charlie Brewer, the four-year starter who transferred to Utah, Bohanon will start for the Bears on Saturday night at Texas State. It will be their first non-conference, regular-season game in 715 days.

“I wanted to absorb as much as I can, learn as much football as I could and take as much as I could from Charlie. That way, I would be ready when my time does come,” said Bohanon, who has already earned a degree at Baylor. “The process is my thing.“

Coach Dave Aranda is going into his second season as Baylor’s head coach, and his first non-conference game.

It has been a long, strange trip for Texas State to get to the start of the third season for Bobcats coach Jake Spavital, the 36-year-old who previously was offensive coordinator at West Virginia, California and Texas A&M.

Early offseason conditioning was interrupted in February because of extended power outages during a severe winter storm. The Bobcats later had to pause spring practices for two weeks because of a COVID-19 outbreak and didn't wrap up those until early May.

“We started off with, if you remember, one of the longest offseason winter conditionings because of the snow apocalypse that hit,” Spavital said. “And then we had the longest probably spring football in the history of spring football.”

Bohanon, who appeared in 15 games the past three seasons, was named Baylor's starter less than two weeks before the opener after a QB competition that included sophomore Jacob Zeno and redshirt freshman Blake Shapen. Brewer started 39 games and threw for 9,700 yards.

“Gerry has a really strong work ethic and has a great appetite for football. You cannot feed him enough and he continues to ask for more,” Aranda said. “You can give him pieces of information here and there and Gerry can connect the dots. He can take the information he has and apply it, and then teach others. As far as that goes, he was at a different level.”

Brady McBride is set to be the first Texas State quarterback to start consecutive openers since 2016, though the sophomore and former Memphis transfer had to compete to keep that role.

Spavital said McBride had the most touchdown drives, the most explosive plays and the best third down percentage during evaluations. McBride didn’t throw the most TD passes, but had the fewest turnovers. Plus, he has experience and familiarity with the offense.

“When you go down and you analyze every single position and scenario that they were put in fall camp and throughout spring football, Brady kind of edged everybody by a little bit,” Spavital said.

The only other Big 12 team to visit 30,000-seat Bobcat Stadium in San Marcos was Texas Tech in 2012, the season Texas State became an FBS team.

“These are the type games that bring the whole community together,” Spavital said. “I just sense the excitement.”

Terrel Bernard was the Big 12’s leading tackler with 55 in Baylor’s first five games last year before a season-ending shoulder injury. He feels like he has gotten over any anxiety about the shoulder.

“At first, I was nervous to get back and get started and stuff,” he said. “After you get that first hit in, it feels good.”

BIG BOY IN THE MIDDLE

Baylor has 10 returning starters on defense, and added transfer nose guard Siaki “Apu” Ika. The 6-foot, 350-pounder played on LSU’s national championship team two years ago when Aranda was the defense coordinator for the Tigers.

“That’s a big boy up front,” Spavital said. “We’ve got to make sure that we can try to eliminate him from the game as much as possible.”

All of Baylor's games in Aranda's first season were Big 12 games. The Bears had multiple attempts last year to get in a single non-conference game canceled because of COVID-19 issues, either because of the Bears or the planned opponent.

The Bears went 2-7. Three of those losses were by a touchdown or less, and only the last two were by more than 10 points.