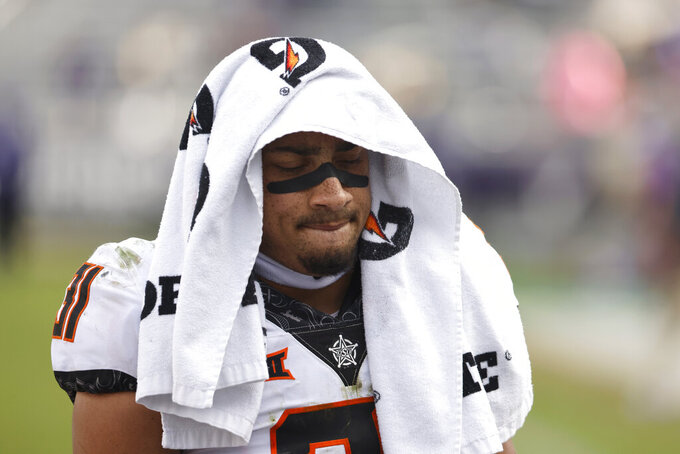 Some things to watch in the Big 12 on Saturday, when now only one of the three scheduled conference makeup games will be played. The Big 12 on Thursday canceled the second attempts for No. 13 Oklahoma to play at West Virginia, and the planned Texas makeup at Kansas. No. 19 Iowa State had completed its regular season with a spot in the Big 12 title game against the Sooners, who now also have an open date before their Dec. 19 matchup.

Oklahoma State at Baylor. This now is the only Big 12 regular-season conference game left on the schedule. With the Cowboys out of contention for the Big 12 title, they are still a slight favorite going to play in Waco, Texas. The game previously scheduled Oct. 17 is now the season finale for first-year Bears coach Dave Aranda. Baylor has won five of six in the series and in a 27-14 loss last week played a tighter game against Oklahoma than the Cowboys did in Bedlam. Baylor held the Sooners to 278 total yards, their fewest since 2015. The Cowboys lost 41-13 in Bedlam and have dropped three of their last five games.

TCU, which hosts Louisiana Tech in a game added just last week, is 5-0 this season and 100-8 in coach Gary Patterson’s 20 seasons when rushing for 200 yards in a game. ... Oklahoma earned its title game slot by winning six games in a row since its first 0-2 start in league play since 1998. ... Without a chance to play another game, Kansas (0-9) finished winless for the second time in six seasons. The Jayhawks are 9-60 in that span that began with an 0-12 record in 2015.

IT WAS A LONG SHOT

The Big 12 tried to get in all 45 conference matchups in this pandemic-affected season, and came close. If the Oklahoma State-Baylor game does get played, that would be a 95.6% completion rate with 43 of 45 scheduled league games played. With TCU's added game against Louisiana Tech, Baylor will be the only team without a non-conference game.

This story has been updated to correct number of conference games league played.

2 hrs ago
By Steve Megargee 3 hrs ago
By The Associated Press 4 hrs ago
By Ralph D. Russo 11 hrs ago
14 hrs ago