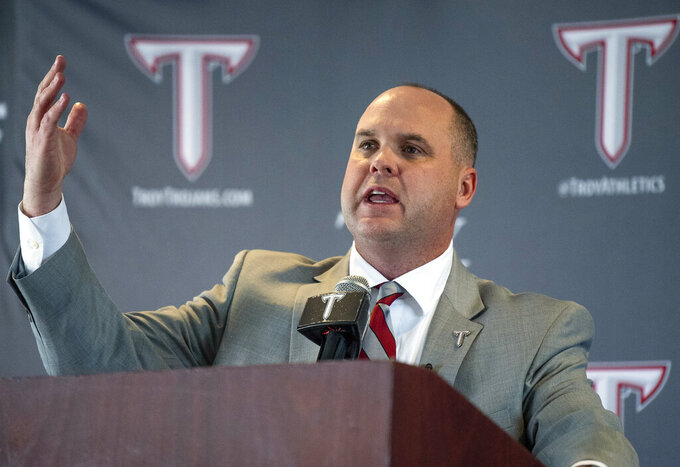 FILE - In this Jan. 11, 2019, file photo, Troy University's new NCAA college football coach Chip Lindsey speaks after he was introduced during a news conference in Troy, Ala. Chip Lindsey and his family were just settling into their new house in Kansas when the call came. Lindsey, who had recently become Les Miles’ offensive coordinator at Kansas, moved into the house with his family on Jan. 4 shortly after they joined him in Lawrence. Then Troy called about its head coaching job and he was introduced back in Alabama on Jan. 10, a whirlwind of packing, unpacking and moving even for a well-traveled football coach(Mickey Welsh/The Montgomery Advertiser via AP, File)

TROY, Ala. (AP) — Chip Lindsey and his family were just settling into their new house in Kansas when he received a call about taking over Troy's football program.

Lindsey, who had recently become Les Miles' offensive coordinator at Kansas, moved into the house with his family on Jan. 4 shortly after they joined him in Lawrence. Then Troy called about its head coaching job and a few days later on Jan. 10, the school announced Lindsey was its new coach.

The timing led to a whirlwind of packing, unpacking and moving even for a well-traveled football coach.

"It was pretty quick," Lindsey said. "We were all living out there for about a week, but that's just part of the gig when you're in college football."

The Troy job seems to be a pretty good fit for the former Auburn offensive coordinator . The 44-year-old Lindsey, who has spent much of his career as a high school coach, returned to the school where he got his brief first foray into the college ranks as the quarterbacks coach in 2010.

Lindsey takes over one of the hotter Group of Five programs, too. Neal Brown led the Trojans to three consecutive seasons with double digit wins, capping each with bowl wins before landing the West Virginia job.

Troy has knocked off traditional powers LSU and Nebraska the past two seasons and became the first Sun Belt football team to crack the Top 25 in 2016.

So Lindsey jumped at the chance even if it meant yet another move. He said he had told Miles that if Brown left, he'd at least get an interview with Troy and that he wanted to be a head coach.

"He said, 'Oh yeah, that'd be awesome. That's a great place,'" Lindsey said. "He was very well aware of Troy from his days at LSU and very supportive of me. The month I was there with him was really a lot of fun."

Part of the allure of the Kansas job was having fuller control over an offense. Now, he's running his own program — and still calling the offensive plays though former Auburn offensive lineman Ryan Pugh is the coordinator.

Lindsey spent the past two seasons at Auburn, working under Gus Malzahn, another former high school coach known for his up tempo offense. Malzahn officially handed over play calling duties to Lindsey, but the offense was still undoubtedly a collaborative effort.

Malzahn had initially brought Lindsey onto the staff as an offensive analyst when he took over in 2013. Lindsey had returned to the high school ranks after one year at Troy because his wife was still the primary breadwinner while working in pharmaceutical sales in Birmingham.

As head man, he said he didn't want "any gray area" in who was calling plays at Troy. He demurs when asked if there was a gray area at Auburn and notes he probably wouldn't be where he's at if Malzahn hadn't given him that chance.

"When you work for an offensive head coach, you have to anticipate that he's going to have a say in what you do," Lindsey said. "I mean, there's nothing wrong with that. We basically ran the offense that coach Malzahn wanted us to run, and it was good. We won 18 games in two years and I enjoyed being there. Auburn's a great place. I'm just really thankful for the opportunity he gave me there."

Now, he's got another one.

The Trojans are picked to finish second in the Sun Belt Conference East Division behind Appalachian State . They tied for the division title last season, but the Mountaineers went to the title game with a 21-10 win over Troy in the regular-season finale.

Dual-threat quarterback Kaleb Barker sustained a season-ending knee injury midway through the season. Barker and running back B.J. Smith, the preseason Sun Belt offensive player of the year, are back to lead Lindsey's offense.

The rapid move helped make it clear to Troy center Dylan Bradshaw how much Lindsey wanted to be in Troy.

"The first day he got here, he expressed how excited he was to be here, that this was his dream job," Bradshaw said. "He went to Auburn, and things were a little rocky there. He took the job with Les Miles. His family had just moved into a house and then he gets a call and he's all for it. His family's all for it. They love Troy, everything about it."