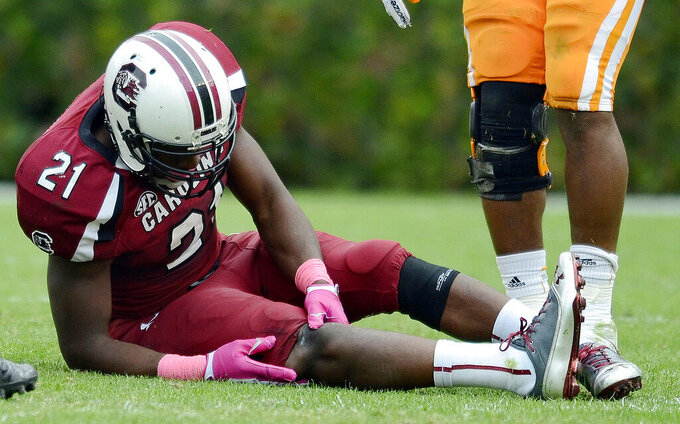 FILE - In this Oct. 27, 2012, file photo, South Carolina running back Marcus Lattimore grabs his right knee after getting hit by Tennessee's Eric Gordon during the first half of an NCAA college football game at Williams-Brice Stadium in Columbia, S.C. Lattimore’s task these days comes away from the field in helping the Gamecocks handle the stresses of major college football and prepare for life when the games are over. Few know better than Lattimore, 27, how things can change for a can’t-miss NFL prospect. (AP Photo/Richard Shiro, File)

COLUMBIA, S.C. (AP) — Marcus Lattimore looks like he could still take the football 10 yards from the goal line, break three tackles and finish in the end zone as he often did in his record-setting career at South Carolina. Instead, Lattimore's task these days comes away from the field in helping the Gamecocks handle the stresses of major college football and prepare for life when the games are done.

Few know better than Lattimore, 27, how things can change for a can't-miss player tagged for the NFL.

"It's a part of who I am," Lattimore says with a smile.

Lattimore starts his second year as South Carolina's director of player development for life skills and head of the team's Beyond Football program. He looks tapered and strong, certainly strong enough to start in the backfield for any host of pro teams who coveted him during his college days.

Lattimore rushed for 1,197 yards — third best in the Southeastern Conference — as a freshman in 2010, guiding the Gamecocks to their only SEC Eastern Division title. But Lattimore's production was cut short in his final two seasons after devastating knee ligament injuries curtailed his career. The second one, at home against Tennessee in October 2012, essentially ended Lattimore's football days although he was drafted by San Francisco the following spring and tried to rehab at the NFL level.

He spent nearly two seasons on the non-football injury list and gave up the game in November 2014.

Lattimore, a South Carolina native, returned to campus and finished his degree in public health. Spurrier's fulltime successor Will Muschamp knew there had to be a role for a charismatic, smart, respected ex-star like Lattimore, whose name is on Williams-Brice Stadium for his record 38 career rushing touchdowns.

Lattimore was hired in January 2018.

"He's walked where they've walked," Muschamp said. "I can talk about it, but he's lived it."

Lattimore loves the game, but doesn't miss the contact and the day-after soreness. He misses the locker room camaraderie and being alongside people enduring the same things as him.

Lattimore tries to bring that to the Gamecocks, along with the perspective high school dreams of NFL glory don't always work out.

"When you look at them, you empathize with what they go through and you see a reflection of yourself," Lattimore said. "In the same mindset of, 'If I don't make it to the NFL, then what?' Everything was in one basket. I have the opportunity to kind of shift that mindset a little bit."

South Carolina's Jay Ulrich has met with Lattimore several times the past year as he adjusted to switching from quarterback to wide receiver. "He's been where we're at and now he's just trying to serve and help us," Ulrich said. "Not only just get through college, but thrive both on the field and off the field."

Muschamp gives Lattimore the flexibility to speak to youth groups, camps and functions. Lattimore partners with Select Health of South Carolina with the focus on teaching children the importance of good health.

Lattimore attends three or four outings a month throughout the state, young fans swarming for a picture or autograph just like his days as the state's best high school runner with a bright, athletic future.

Lattimore is thrilled about his new path.

"It's not only fulfilling, it has revealed my purpose," Lattimore said.

Lattimore hopes to return to school for a degree in organizational psychology where he can concentrate on helping groups and individuals build a healthy culture to have success in any field. It's something Lattimore has understood well since his days in college and the knee injuries that changed his course.

"I feel like that's how my life has been. You've got to overcome some type of fear," he said. "I overcame my fear and it ended up working out."