With focus on football, USC WR London ready to dominate 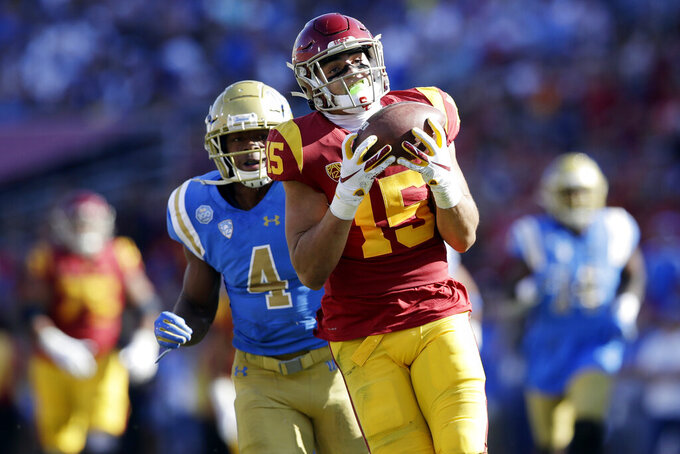 FILE - In this Nov. 23, 2019, file photo, Southern California wide receiver Drake London (15) makes a catch against UCLA during the first half of an NCAA college football game in Los Angeles. Focusing on one sport for the first time, expectations are even higher for what London can accomplish on the football field, starting when No. 15 USC hosts San José State on Saturday.(AP Photo/Marcio Jose Sanchez, File)

LOS ANGELES (AP) — When Drake London came down with the game-winning touchdown in Southern California’s opener against Arizona State last year, the signature moment of what would be his breakout sophomore campaign came after nothing resembling a normal preseason.

London started 2020 playing basketball for the Trojans before the coronavirus pandemic led to a truncated Pac-12 football season.

But after focusing on one sport for the first time, expectations are even higher for what London can accomplish on the football field, starting when No. 15 USC hosts San Jose State on Saturday.

“He’s done a great job of preparing and putting the work out there, you know. Now we got to just put it out there on Saturdays,” wide receivers coach Keary Colbert said.

London said at Pac-12 media day in July that not having to alternate between football and basketball allowed him to improve all aspects of his gridiron game. During practice Tuesday, it was the added muscle on his 6-foot-5, 210-pound frame that stood out, allowing him to physically dominate defensive backs to an even greater degree after getting 33 receptions for 502 yards and three touchdowns in six games last season.

Quarterback Kedon Slovis has been equally impressed with London’s improved attention to detail, much of which came from his work as an outside receiver during spring practice after mostly playing in the slot last year. When Slovis and London worked together over the summer, they focused on how to further maximize London’s route tree no matter where he is on the field.

Where London will line up against the Spartans isn’t certain because of uncertainty elsewhere in the receiving corps. Gary Bryant Jr., a sophomore who was expected to start and handle kick returns, will not be available after being placed in health and safety protocols, coach Clay Helton said.

But positioning won’t matter given the degree of trust Slovis has in London. Slovis believes there isn’t a coverage technique a defender can play on London that he cannot overcome.

“I think if the DB plays it a certain way, we can kind of find a way to counter that movement, so he’s a great player. And it’s kind of nice having that target out there where, even if they overplay a route, I think you have a back shoulder (throw) or some kind of opportunity for him,” Slovis said.

Adjusting to the ball in the air is one of the more obvious examples of how London puts his hoops experience into practice as a football player. While he doesn’t expect to play organized competitive basketball again, London knows his time as a multisport athlete has been invaluable in becoming a strong candidate for the Biletnikoff Award presented to college football’s top receiver and other individual honors in his third season at USC.

“Of course I miss it, but I had to make a decision, and I made a decision to play football. But I will say that basketball has helped me like tremendously with my game,” London said. “Coach KC always tells me to go out there and go cross somebody up on all my releases. Jump balls, spacing, and just little things like that have helped my football game a lot.”

While basketball helped shape how London approaches playing receiver, Colbert attributes the dramatic progress he has made since the start of this year to concentrating on one sport.

“In anything you do, repetition is key,” Colbert said. “The more repetitions you get at something, the better you’re going to get naturally. So I think him narrowing that focus to football, you’re seeing the dividends out here on the football field as far as the work he’s put in."