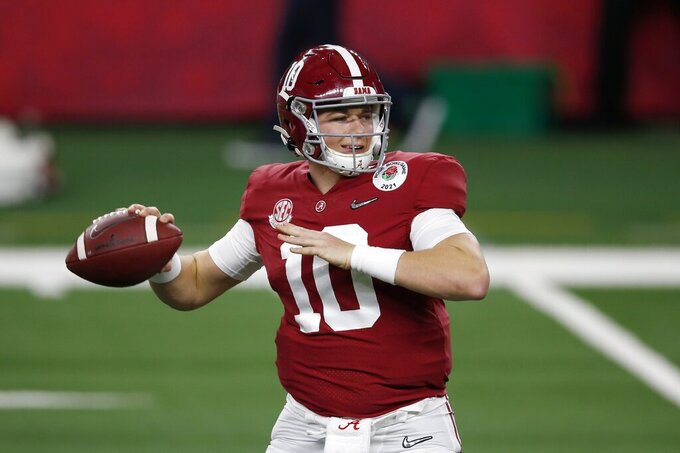 BIO: The relatively unheralded recruit showed his gumption just by signing with Alabama in a recruiting class headed by Tua Tagovailoa with Jalen Hurts just having completed a terrific freshman season. Jones waited his turn and proved he was up for the job when he took over following Tagovailoa's hip injury late last season. There was speculation that five-star freshman Bryce Young might challenge for the starting job before COVID-19 forced the cancellation of spring practice.

KEY STATS: Led the nation with a completion percentage of 76.5 and a pass efficiency rating of 202.35 in the regular season. Passed for 3,739 yards and 32 touchdowns against just four interceptions in the Tide's 11 games heading into the playoff. His four 400-yard passing games this season are more than any other Alabama quarterback has produced in an entire career. That includes a 418-yard, five-touchdown performance in the Southeastern Conference championship win over Florida.

BEST GAME: A player who had three straight 400-yard games early in the season saved his perhaps best performance for the biggest stage so far. He completed 33 of 43 passes with an interception against the Gators.

BEFORE COLLEGE: Rated a four-star recruit in the 247Sports composite rankings, Jones arrived as a developmental player at about 180-185 pounds. He was rated as the No. 12 pro-style quarterback, but Jones had a winning track record. He helped lead The Bolles School to the Florida 4A state championship game as a senior in 2016, passing for 1,532 yards and 29 touchdowns.

DRAFT STOCK: His stock, if Jones should opt to skip his senior season, has undoubtedly been helped by sustained success beyond his strong finish last season. Projected as high as a No. 5 pick in at least one mock draft, Jones is pegged as a potential later selection in the opening round and a likely second-rounder in others.

THE SKINNY: Jones has been dynamic this season, launching some bombs and also expertly taking what the defense gives him without taking unnecessary risks. Scarcely missed a beat even with the ankle injury to dynamic receiver Jaylen Waddle that has sidelined him most of the season. Jones has exceeded just about every outside expectation this season, leading one of the nation's most explosive offenses. Also has a knack for shaking off mistakes and not letting them affect his play.

BIO: Lawrence has looked ready for a Heisman Trophy moment ever since arriving at Clemson before the 2018 season. As a freshman, he led the Tigers to the national championship, dominating Alabama in a 44-16 victory. Lawrence is 34-1 as a college starter and the lone loss — and perhaps his poorest performance — was in the title game in January 2020, a 42-25 loss to LSU. Lawrence, the likely No. 1 pick in the next NFL draft, could’ve easily opted out of the season, but fought hard for the season to proceed in the pandemic. Lawrence also grew as a leader, front-and-center in Clemson’s efforts to combat social injustice this summer. Lawrence won his third ACC title as a starter and was named the ACC offensive player and overall player of the year.

KEY STATS: Lawrence’s numbers are not as robust as other finalists, partly because Clemson’s early dominance typically sends him to the bench for good stretches of the second half and he missed three games due to the coronavirus. Still, Lawrence completed nearly 70% of his throws for 2,753 yards and 22 touchdowns along with four interceptions in the regular season.

BEST GAME: After missing Clemson’s 47-40 double overtime loss to Notre Dame in November, Lawrence faced the Fighting Irish in the ACC title game and helped the Tigers roll to their sixth conference crown with a dominant 34-10 victory. Lawrence completed 25 of 36 passes for 322 yards and two touchdowns against a stingy Irish defense. He also rushed for 90 yards and a score.

BEFORE COLLEGE: Lawrence was a five-star recruit almost since he took up the game. He was 52-2 as a starter at Cartersville High School in Georgia, taking over the third game of his freshman season. Lawrence finished with 41 straight victories, two state championships and Georgia state records for passing yards and touchdowns previously held by another of Clemson’s national championship quarterbacks, Deshaun Watson.

DRAFT STOCK: Lawrence was locked in as the No. 1 overall quarterback right after Clemson’s 2018 national title, some outside the program suggesting he give up his last two seasons of college to prepare for the 2021 draft. Lawrence, who graduated in December, has said he’s going pro and most expect his name to be the first one called at the NFL draft next spring.

THE SKINNY: At 6-foot-6 with a cannon arm and unflappable manner, Lawrence is what a screenwriter might come up for a film about a star quarterback. Lawrence’s Heisman credentials this season may have slipped some when he went more than a month without playing, but he and the Tigers made the playoff again just the same.

KEY STATS: Led the nation with 98 catches and 1,511 yards going into the playoff, and his 17 touchdown receptions rank second. Had seven 100-yard games and six multi-touchdown performances. Scored on an 84-yard punt return against Arkansas.

BEST GAME: One could easily argue it was the SEC title game. But Smith had 11 catches for 203 yards and four touchdowns against Mississippi State. He caught scoring passes of 35, 53, 11 and 10 yards. He added seven catches for 130 yards and three TDs in the CFP semifinal win over Notre Dame.

BEFORE COLLEGE: Rated a four-star recruit, top 10 receiver and No. 64 overall prospect according to the 247Sports composite rankings. Was named Most Outstanding Player of the 2016 Louisiana Class 3A state championship game.

DRAFT STOCK: The 6-foot-1, 175-pound Smith could have left after a big junior season and competed with Ruggs and Jeudy for draft position. Now, he’s rated as a likely first-round pick, vying with players like Waddle and LSU’s Ja’Marr Chase to be the top receiver chosen.

THE SKINNY: Has found a way to continue putting up huge numbers even without Waddle consuming much of the secondary’s attention. Made a leaping one-handed touchdown grab against LSU. Despite all the attention, Tide coach Nick Saban calls him “probably one of the most selfless guys that I’ve ever had the opportunity to coach.” Obliterated the SEC record for receiving touchdowns with 43 — so far.

BIO: The NCAA transfer portal was made for guys like Trask, a career backup looking for a better opportunity elsewhere. But Trask never considered moving on despite spending most of his high school and college careers waiting in the wings. He stuck it out in Gainesville and ended up with a record-setting senior year, his first as a full-time starter. He finished with 43 touchdown passes, breaking the school’s single-season mark (39) set by 1996 Heisman Trophy winner Danny Wuerffel, and ran for three more. Trask could become the fourth Heisman-winning QB in school history, joining Steve Spurrier (1966), Wuerffel and Tim Tebow (2007).

KEY STATS: His 43 TD passes lead the nation by 11 and are tied for the eighth-highest total through 11 games in Bowl Subdivision history. Trask threw four or more TD passes in each of Florida’s first six games this year, making him the first player in SEC history and fourth FBS quarterback since 1996 to accomplish the feat.

BEST GAME: He became the Heisman front-runner against resurgent Arkansas in mid-November, when he completed 23 of 29 passes for 356 yards and six touchdowns in a 63-35 beatdown that made the Gators look like legitimate national championship contenders.

BEFORE COLLEGE: He was the 124th-ranked quarterback coming out of high school in 2016. Trask grew up in Manvel, Texas, and his parents were such diehard Texas A&M fans that they named their son after Kyle Field. Trask played behind current Miami starter D’Eriq King in high school and never got a sniff from his beloved Aggies. He landed at Florida almost by accident and was buried on the depth chart behind Austin Appleby, Luke Del Rio, Feleipe Franks and Malik Zaire.

DRAFT STOCK: Trask is widely considered a late first-round draft pick who could slide into the second. His decision-making ability and accuracy are his top traits, but his lack of mobility will likely have him selected after Clemson’s Trevor Lawrence, Ohio State’s Justin Fields and BYU’s Zach Wilson and possibly behind Alabama’s Mac Jones and North Dakota State’s Trey Lance.

THE SKINNY: Even when it looked like Trask would get his chance in 2018, he broke a foot in practice days before the game and had to extend his wait. It wasn’t until Franks’ season-ending ankle injury in 2019 that Franks finally made his way onto the field. He quickly proved he belonged. He really shined this season, leading the nation in passing yards (375 a game) and touchdowns. His only downside: The Gators closed with a three-game losing streak that ruined any chance they had of winning a national championship.