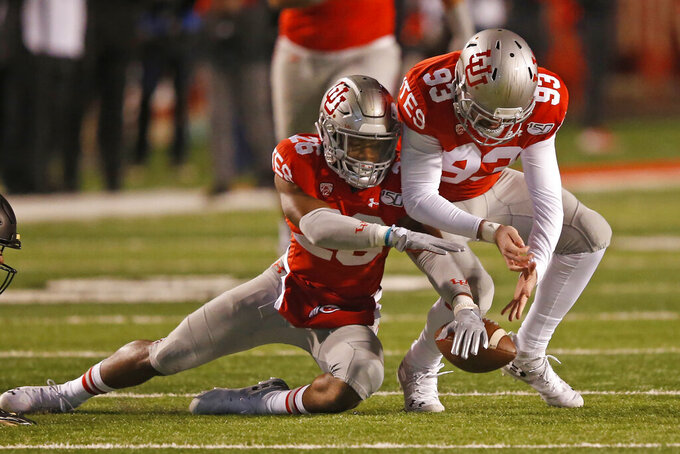 Utah's Terrell Burgess (26) and Semisi Lauaki (93) reach for a fumble against Colorado in the first half during an NCAA college football game Saturday, Nov. 30, 2019, in Salt Lake City. (AP Photo/Rick Bowmer)

“I told them we needed to focus and we would knock over any obstacle in our way,” Huntley said as he walked off the field after No. 6 Utah’s Pac-12 South clinching 45-15 victory over Colorado on Saturday night. “I told them we had it in us to accomplish what we wanted. And now here we are. We here!”

The Utes (11-1, 8-1, No 6 CFP) needed a quarter to get rolling in 25-degree temperatures, but romped to their eighth straight victory as Brant Kuithe scored three touchdowns. Huntley was 14-for-17 for 165 yards and connected with Kuithe twice for scores.

"It was a little cold outside," Huntley said of the Utes punting on their first three possessions. "We started out slow, but we handled business."

Huntley admitted the emotions of senior night got to their team's 19 seniors, including the three from Hallandale High School in Florida -- Huntley, Zack Moss and Demari Simpkins, who all played integral roles in the victory and the team’s best season since joining the Pac-12.

"I cried, not going to lie," said Simpkins, who had a 66-yard punt return for a touchdown to make it 31-7 with 56 seconds left in the third quarter. "But we were more relentless and we didn't want to leave no doubt. I felt like everybody doubted us after that loss and we had something to prove."

The Buffalo defense keyed on Moss and made it tough to run between the tackles, but the all-time Utah rushing leader tallied 88 yards on 20 carries and scored on a 1-yard run to put the game away in the fourth quarter and set up Utah’s matchup against No. 14 Oregon on Friday.

"I knew it was going to be a physical game and we were able to match that. That was not an issue for us. It was more about execution,” Colorado coach Mel Tucker said.

Auburn did the Utes a favor in the College Football Playoff race by outlasting No. 5 Alabama 48-45 on Saturday. The Utes could be sitting in fifth when the next selection committee rankings come out on Tuesday.

After five drives that netted a total of 25 yards, Colorado mounted their second foray into Utah territory early in the fourth quarter and Montez threw to Daniel Arias for a 27-yard touchdown and added a 2-point conversion on an improvised pass to Russell to cut the lead to 31-15.

But Moss and Kuithe scored again to put it away.

"When we tried to focus on one thing, they started doing another thing,” Colorado linebacker Davion Taylor said.

The Utes started the second-half scoring in familiar fashion, with a bruising 12-play drive that ended with Devin Brumfield’s 1-yard plunge for a 24-7 advantage.

“This is the reason a lot these seniors came back. There are four or five of them that could have exited and turned professional but they had some unfinished business. Now they’re back and in position to finish it,” Utah coach Kyle Whittingham said.

Kuithe caught touchdown passes of 38 and 7 yards and ran 15 yards for a score. The tight end also had 44-yard run on a jet sweep.

"I've always knew I can do that but I just needed the opportunity to make plays in space," said Keith, who leads the team in receptions and has picked up production dramatically in the last three games.

Colorado: The Buffaloes were looking for their third straight win to become bowl eligible for first time since they won the Pac-12 South and played in the 2016 Alamo Bowl.

Utah: The Utes limited Colorado to 60 yards rushing. For the 10th time in 12 games, the Utes kept their opponents under 70 yards on the ground to become the first team since Michigan did it 11 times in 2006.

Huntley and cornerback Jaylon Johnson came up limping during the game, but they finished and appear healthy going into the Pac-12 Championship.

Bradlee Anae, another senior who was on many draft lists after last season, had one-and-a-half sacks to tie Hunter Dimick (2013-16) for the all-time lead with 29.5 career sacks. The Utes sacked Montez five times in the game.

With Alabama dropping their Iron Bowl game but with other top teams winning, the Utes might climb into the top 5 but no further.

Colorado: The season is over.