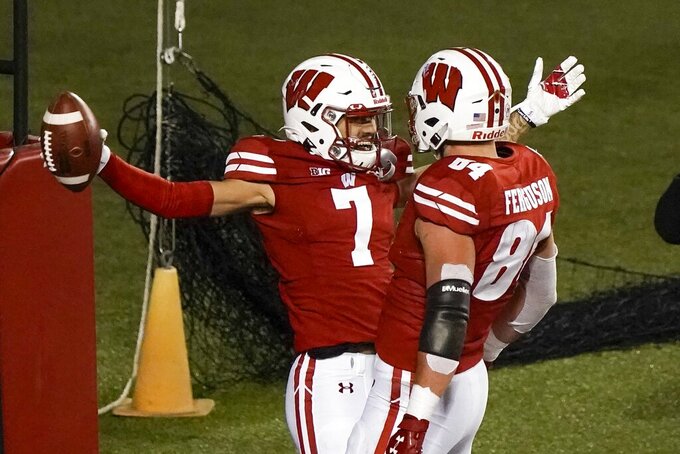 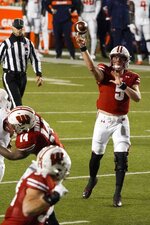 Mertz threw five touchdown passes to match the Wisconsin record in a commanding first career start and the No. 14 Badgers beat Illinois 45-7 on Friday night.

“The kid's definitely smooth,” said tight end Jake Ferguson, who caught seven passes for 72 yards and three touchdowns. “He was smiling cheek to cheek after the first touchdown. He knew, and everybody in that huddle knew, we were rolling. It's just awesome to see that out of him.”

Mertz set a school record for completion percentage on 20-of-21 passing, finishing with 248 yards. His lone incompletion was a pass that running back Garrett Groshek dropped midway through the third quarter.

“It was definitely fun," Mertz said.

The redshirt freshman delivered a buzzworthy performance during the Big Ten’s long-awaited opening night. The Big Ten announced Aug. 11 that it would postpone all fall sports until the spring due to the coronavirus pandemic, then reversed itself Sept. 16 by saying it would begin the season in mid-October.

While most other conferences began playing last month in front of partially filled stadiums, Wisconsin had cutouts in the stands and piped-in crowd noise Friday as it began its nine-game schedule.

The unusual circumstances meant there were no fans jumping around when Wisconsin continued its tradition of playing House of Pain's “Jump Around” before the fourth quarter, and there were no spectators cheering on Mertz during his record performance.

“I haven't checked my phone yet,” Mertz said. “It's great to hear from those guys ad it means a ton, but I'm just happy the guys in the locker room are pumped right now. We've got to keep building on that.”

He wasted no time making the most of his opportunity. The only previous Wisconsin quarterbacks to throw five touchdown passes in a game are Darrell Bevell against Nevada in 1993 and Jim Sorgi against Michigan State in 2003.

“I thought he had good poise,” Wisconsin coach Paul Chryst said. “I thought he saw the field well. You never now quite how someone’s going to react in their first start, but I thought he was himself.”

Mertz's brilliant night helped Wisconsin gain revenge after losing 24-23 to 30 1/2-point underdog Illinois last year in one of the 2019 season's biggest upsets. The Badgers put this one out of reach by halftime.

“I thought I had the team more ready, more prepared to play than we showed out there tonight,” Illinois coach Lovie Smith said. “We will play better than that. We’re a better football team than that.”

After Illinois fumbled the ball away on the game’s second play from scrimmage, Mertz hit fullback Mason Stokke for a 10-yard touchdown pass. He found Ferguson wide-open in the back of the end zone for a 5-yard score to make it 14-0.

Illinois briefly got back into it late in the second quarter when Ferguson fumbled at the end of a 9-yard completion. Illinois linebacker Tarique Barnes picked up the loose ball and ran 39 yards into the end zone to cut Wisconsin’s lead to 14-7.

Mertz responded to Illinois’ touchdown by throwing a 34-yard completion to Ferguson and then hitting the tight end again for a 14-yard score with 1:06 left in the half. After Illinois went three-and-out on its next series, Mertz threw deep and found Danny Davis for a 53-yard touchdown pass with 28 seconds left until halftime.

“I was happy with how we played (after the fumble) with that little extra chip on our shoulder and a little extra swag,” Mertz said.

Illinois: The Illini need more from their passing attack. Quarterback Brandon Peters had seven carries for 75 yards but was 8 of 19 through the air for only 87 yards. Illinois suffered a major blow when linebacker Jake Hansen left with an injury in the first half.

Wisconsin: The Badgers just might have an uncharacteristically potent passing attack. They may need to throw the ball a little more often than usual this year as their rushing attack adjusts to life without Indianapolis Colts rookie Jonathan Taylor, the two-time winner of the Doak Walker Award that goes annually to college football’s top running back. Without Taylor in the backfield, Wisconsin gained 182 yards on 54 carries. Groshek led the way with 70 yards on 13 carries.

Any Top 25 voters who were leaving Big Ten teams off their ballots until that conference opened play assuredly will include Wisconsin now that the Badgers have won a game. That should enable Wisconsin to move up when the new poll comes out Sunday.

Wisconsin: At Nebraska on Oct. 31.