No. 1 Clemson hopes to avoid letdown against Georgia Tech 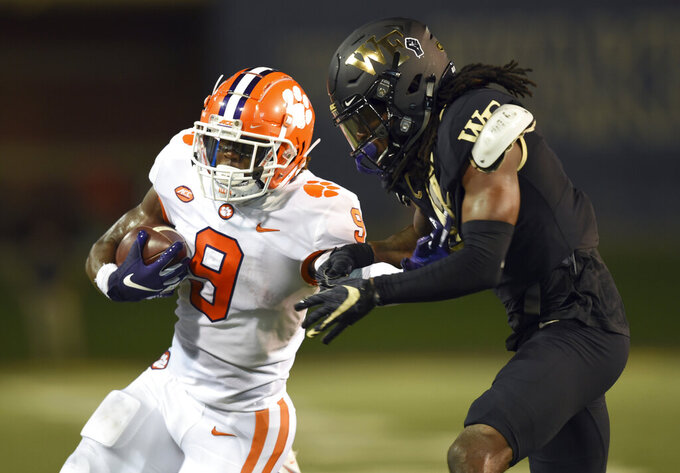 Coming off a highly anticipated win over then-No. 7 Miami, Clemson will try to avoid a letdown and protect its No. 1 ranking. The Yellow Jackets already have matched their 2019 total with two ACC wins in their second season under coach Geoff Collins. The Yellow Jackets will play for their first win over a No. 1 team since beating Virginia 41-38 on Nov. 3, 1990.

Clemson RB Travis Etienne vs. Georgia Tech LB Quez Jackson. The Yellow Jackets, who rank 11th in the ACC in rushing defense with an average of 189.3 yards allowed on the ground, will be challenged to contain Etienne, who has rushed for 392 yards. Etienne also has 17 catches for 245 yards. Jackson has led Georgia Tech in tackles in three of four games and had a forced fumble and fumble recovery in last week’s win over Louisville.

Clemson RB Etienne: The Heisman Trophy candidate can challenge for the ACC career rushing lead. He has 4,430 yards and needs 35 to pass former Florida State RB Dalvin Cook (4,464) for second. He needs 173 yards to break the record held by North Carolina State’s Ted Brown (4,602) from 1975-78.

Georgia Tech QB Jeff Sims: The freshman threw for 249 yards and rushed for 64 in last week’s win over Louisville and was named ACC rookie of the week for the second time. He is the nation’s only quarterback to have three games this season with at least 240 yards passing and 60 yards rushing.

This is the first time Georgia Tech has played a No. 1 team at home since a 3-3 tie against Notre Dame on Nov. 8, 1980. ... Clemson has five consecutive wins in the series, including 52-14 last season. ... Georgia Tech has provided strong protection for Sims, allowing only two sacks. Clemson’s defense has 18 sacks, tied for second in the nation. ... Clemson ranks in the top 10 in the nation in scoring, averaging 42.3 points per game, and scoring defense, allowing 13.3. ... Clemson is 16-2 when ranked No. 1 and has never lost a regular-season game when holding the top ranking.