No. 19 Syracuse finishes surprising season by beating BC 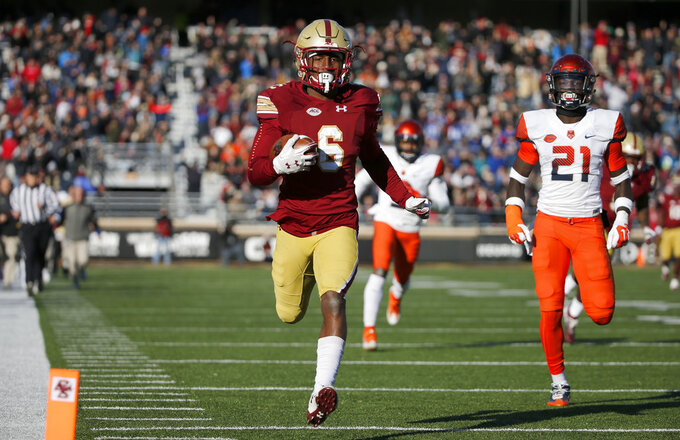 Boston College wide receiver Jeff Smith (6) runs in for a touchdown after catching a pass ahead of Syracuse defensive back Trill Williams (21) during the first half of an NCAA college football game, Saturday, Nov. 24, 2018, in Boston. (AP Photo/Mary Schwalm) 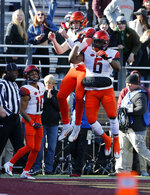 BOSTON (AP) — Syracuse coach Dino Babers was watching Eric Dungey in practice this week when he realized his quarterback didn't look like a guy who had an injury.

"He did something that was really, really natural," Babers said. "All the hair stood up on my arm because right then I knew we had a chance to win."

Dungey threw for 362 yards and three touchdowns and ran for three more scores on Saturday, leading No. 19 Syracuse to a 42-21 victory over Boston College.

Dungey, who left last week's game against No. 3 Notre Dame clutching his lower back, is the third player in school history to account for six scores in a game; the first was Hall of Famer Jim Brown. With 32 running and passing touchdowns this year, Dungey also passed Donovan McNabb for the Syracuse single-season record.

"I knew I was going to play really when I got in the training room," Dungey said. "There was no way I wasn't going to play my last game."

After losing its last five games last year, including a 42-14 defeat by BC in the finale, Syracuse was picked to land at the bottom in the Atlantic Division in the Atlantic Coast Conference preseason poll. Instead, the Orange (9-3, 6-2) finished second to second-ranked Clemson, and will head to their first bowl game since 2013.

"It's crazy to think about," Dungey said. "We've got another four weeks or something to get ready for the bowl game, trying to get a 10th win. I'm just at a loss for words."

"Early in the season, I would say we were taking the next step," receiver Michael Walker said. "The last couple of weeks have been tough."

Syracuse: The Orange finished with nine wins for the first time since 2001 and were second only to Clemson in the entire ACC.

BC: The Eagles concluded with a three-game losing streak and — unless they win their bowl game — their fifth seven-win season in six years under coach Steve Addazio.

"A week ago Saturday, we're the 19th team in the country. We had (ESPN's) 'Gameday' here," Addazio said. "Why did we have 'Gameday' here? Because we were playing for the conference championship just two weeks ago. We took a big step. We sold this place out — our first sellout in years. A lot of good things have happened."

The Orange gave up the first score of the game and then scored touchdowns on three straight possessions, starting with a 75-yard pass from Dungey to a wide-open Sean Riley. On the ensuing kickoff, kicker Sterling Hofrichter forced and recovered a fumble.

"We've got the toughest kicker in the ACC," Babers said. "A kicker knocking the doggone ball out? How about that?"

Dungey's 4-yard run made it 14-7 and the Eagles never got any closer. Dungey followed with a 2-yard touchdown run and also scored on an 18-yard quarterback sneak right before the half to give the Orange a 28-14 lead.

Riley caught five passes for 115 yards, and Dontae Strickland carried 20 times for 129 yards for Syracuse, which bounced back from a 36-3 loss to Notre Dame to win for the fifth time in six games.

Anthony Brown completed 17 of 37 passes for 251 yards and two touchdowns for BC. But he also threw two interceptions and fumbled away what may have been the Eagles' last chance to come back.

BC running back AJ Dillon, who has been nursing an ankle injury, ran 12 times for 56 yards before leaving the game at halftime. Defensive ends Zach Allen and Wyatt Ray, two of the Eagles' biggest stars, also left with injuries.

Reilly was so wide open on Syracuse's first touchdown that Dungey was able to just loft it up to him. He waited for it to come down and then waltzed into the end zone.

The Eagles took advantage of a blown coverage by the Orange on a 69-yard connection from Brown to Jeff Smith that made it 21-14.

Syracuse: The Orange will be a candidate for the Camping World Bowl.

Boston College: The Eagles could be headed for the Military Bowl in Annapolis, Maryland, or the Sun Bowl in El Paso, Texas, both on Dec. 31.