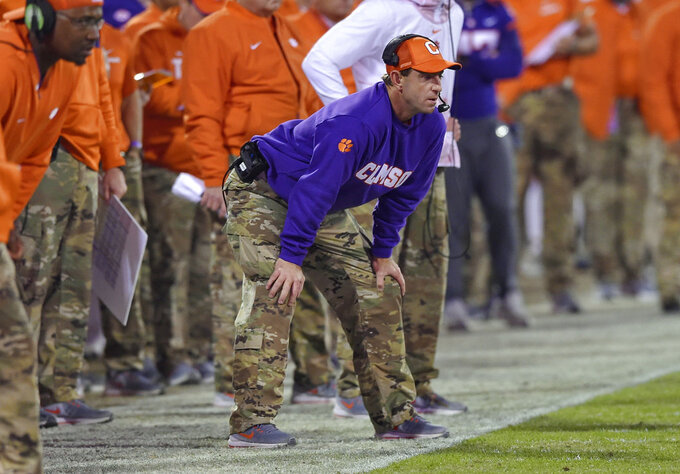 CLEMSON, S.C. (AP) — Clemson center Justin Falcinelli was getting ready for college five years ago when he heard from family, friends and other schools about the Tigers' five straight losses to rival South Carolina.

Now, the second-ranked Tigers (11-0) have a chance to hang their own five-game win streak on the Gamecocks (6-4), something that brings a smile to Falcinelli's face.

"It's kind of nice to flip the script," he said.

Tigers coach Dabo Swinney understands that too well. There are scores of photographs with a smiling Swinney, his arm around a fan who has their hand fanned out to display five fingers — the South Carolina "five bomb" commemorating in vibrant color those five defeats from 2009 through 2013.

Clemson co-offensive coordinator Jeff Scott chuckles when reminded of the photos. It was frustrating to see when the Tigers were on the bad end of the rivalry. He would rather go through the disappointment, though, understanding that college football is front and center in the Palmetto State.

"Obviously, you don't like seeing those things," said Scott, a former Clemson player whose father, Brad, was head coach for five years at South Carolina. "But at the end of the day, you like being able to coach at a place where football matters and you have passionate fans on both sides that bring a lot of energy."

Swinney states simply that the rivalry game "is a goal of its own, a season of its own."

It's a season the Tigers have owned the past few years. Clemson has outscored the Gamecocks 162-66 and laid one of the worst beatings on rivalry history on South Carolina, 56-7, the last time it visited Death Valley in 2016.

"We understand we need to do a better job on our side," Gamecocks coach Will Muschamp said.

Scott remembers too well getting caught up in the rivalry passions. He was a teenager when his dad was leading South Carolina from 1994-98 when he went out to get the paper and saw three Clemson Tiger paws painted on his family's driveway.

Scott grew up in Tallahassee, Florida where his father was a longtime assistant to Florida State coach Bobby Bowden, but had not felt the personal, one-on-one level of the rival's other side before that moment.

"At least it was water-based paint," Scott joked about his brother, John, having to clean it up.

Clemson defensive coordinator Brent Venables, who coached in bitter rivalries with Texas and Oklahoma State when he led Oklahoma's defense, believes there's true "deep-seeded hate" in this one.

He's witnessed young people at youth basketball and baseball games happily go up to Swinney and say things against Clemson or yell "Roll Tide" in a jab against the team's two College Football Playoff losses the past three years.

"If my child was disrespectful to anyone like that, we'd have some serious problems," Venables said. "But I think it's allowed in this rivalry."

Scott said he hoped to have receiver Hunter Renfrow available for the game. Renfrow left last week's 35-6 win over Duke in the first half. Scott would not say Renfrow is going through the concussion protocol, but is being monitored and his availability for Saturday's game will be evaluated as the week progresses.

Falcinelli, a Clemson redshirt senior, shook off most of the talk he heard downgrading the Tigers during his high school days. He just resolved himself to helping end South Carolina's winning streak when he arrived.

Another win in the series — which would also be Falcinelli's fifth — would be Clemson's longest streak of success since winning seven in row over the Gamecocks from 1934-40.

"It'd just be incredible if we could add that to the list of all the things we've done this season," Falcinelli said.