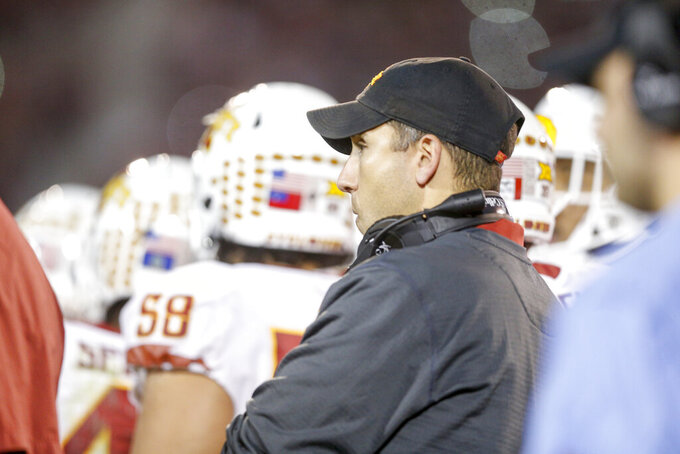 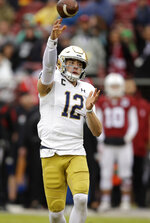 ORLANDO, Fla. (AP) — No team coming off an appearance in the College Football Playoff semifinals begins the next season with a goal of reaching the Camping World Bowl.

No. 14 Notre Dame (10-2, No. 15 CFP) welcomes the opportunity to play Iowa State (7-5) on Saturday, though, and the upset-minded Cyclones are just as excited about the potential long-term benefits of facing a marquee program such as the Fighting Irish.

“One of the really great things about bowl games is you are putting an exclamation point on a really powerful chapter of a senior class and the 2019 football team. But you're also having some leadership start to occur from what 2020 could look like and feel like,” Iowa State coach Matt Campbell said.

“Development and growth ... I think all those things are really, really important when you're really putting focus on building our program,” Campbell added. “That's what we've really done here, using all these opportunities to continue to not only better our present but better our future on top of it."

For Notre Dame, which lost to Clemson in last season’s CFP semifinals, it’s a chance to finish another double-digit win year on a positive note. The Fighting Irish have won five straight following a 31-point road loss to Michigan in late October, reaching 10-plus victories in three consecutive seasons for the first time since 1991-93.

“We see quite a variety of defenses each year playing as an independent. This will rank as one of the more unique defenses,” Notre Dame coach Brian Kelly said. “This 3-5-3 configuration requires an attention to some things that we haven't seen. ... The structure that they run is a bit different than what we normally see.”

With four losses by a combined 11 points to teams finishing in the final CFP rankings, Iowa State is looking for a signature win that will set 2019 apart for 8-5 finishes the past two seasons. The Cyclones lost to CFP semifinalist Oklahoma 42-41, Baylor 23-21, Iowa 18-17 and Oklahoma State 34-27.

“I think this is another year where I talk a lot about faith and fear. I don't think we've ever been fearful of an opponent or a team or a situation, but I think sometimes we're fearful of making a mistake in the moment. And that's hard. It's hard to be your best when that's what it looks like,” Campbell said.

“This team I think really learned some unbelievable lessons in taking what we've learned, applying it obviously this week but really taking it into the offseason and saying how do we continue to make a really powerful step forward," the coach added. “That part is really exciting."

Iowa State's five losses, all to teams playing in bowl games, came by a combined 21 points. The Cyclones led or were tied in fourth quarter in four of them. In the other, they missed a two-point conversion try with 24 seconds remaining that would have given them the lead against Oklahoma for the first time. Iowa State, Washington and Oklahoma are the only Power-5 schools that haven’t lost a game by more than 14 points over the last three seasons.

Notre Dame has allowed just 3.67 points in the first quarter this season, holding six opponents scoreless. The Fighting Irish outscored the opposition 101-44 during the opening 15 minutes and 245-113 in the first half.

Iowa State had one of the best passing attacks in the Big 12 this season, with sophomore Brock Purdy throwing for 3,760 yards, 27 TDs and nine interceptions.

“He's got bits and pieces of so many guys that we've gone against before. I think probably the one thing that stands out for me is just a great competitor,” Kelly said. “You don't want the ball in his hand with a couple minutes left. He finds ways to make plays."