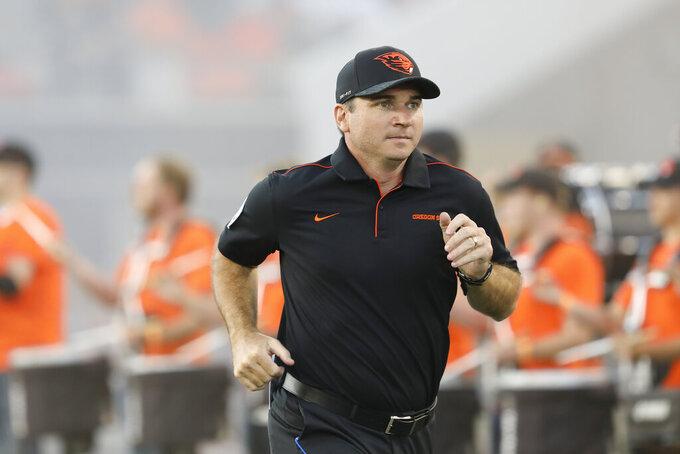 One of the things Oregon State coach Jonathan Smith said he wanted to improve in his second season with the Beavers was the defense.

After the team's opener, it's clear the D still deserves that attention.

The Beavers gave up 555 yards in total offense in a 52-36 loss to Oklahoma State last weekend. The Cowboys racked up 352 yards on the ground — thanks in part to a career performance by Chuba Hubbard — and 203 via the pass.

Hubbard's 221 yards and three touchdowns vaulted him into the national lead for rushing yards after the season's first week.

Oregon State was ranked 121st out of 129 for total defense, and 127th for rushing defense after the first game. It was a continuation of the struggles the Beavers had last season, when they gave up an overall average of 45.7 points and 536.8 yards per game — ranking them 128th in the nation.

Still, it's just the first game, and Smith pointed to that fact this week.

"We're not overreacting to game one. This is the first game, after all that practice. Games are different. But we're not underreacting, either," he said. "We're focusing on the details and urgency to improve."

One point of emphasis for Smith was the Beavers' need to stop opponents on third down. The Cowboys converted 10 of 13 third downs.

"We made the point on third down — and that did show up watching the tape — we've got to do better on third down. But we did put them into situations on third downs that we've just got to execute better," he said.

Oregon State's defense forced no turnovers. Jaydon Grant had the team's only sack although there appeared to be several more chances. But the Beavers did show some improvement with nine tackles for loss.

"It is frustrating. I mean, we worked so hard during fall camp, during winter conditioning," said inside linebacker Shemar Smith. "We still had progress, some flashes in the game. We just have to do it every time to come out with the outcome that we want."

And granted, Oklahoma State's offense was solid in the opener. Hubbard, who showed flashes of what he could do last season, was particularly effective.

"Those guys definitely played with heart. Obviously, it's a first game, you're gonna make some mistakes. As an offense, we were rolling. Offensive line was moving guys. They did a great job there. I'm not gonna knock on their defense, They played hard," Hubbard said. "I know they'll definitely have a better season than last year."

Hawaii, Oregon State's opponent on Saturday, presents an entirely different challenge with its run-and-shoot offense. The Rainbow Warriors had a bye last weekend after a zero week 45-38 upset of Arizona.

Cedric Byrd II caught 14 passes for 224 yards against the Wildcats. Quarterback Cole McDonald threw for 378 yards and four touchdowns but he threw four interceptions, too, and didn't play the second half.

"These guys play good at home. They're coming off a great win against Arizona, and then a bye week, so we've got our work set out for us, which I know our guys will be excited about," Smith said. "You want to play against challenges, and so we're looking forward to this challenge."

Outside linebacker Addison Gumbs said after the opener that he wasn't discouraged.

"I still feel like we're a good defense. We didn't come out and show it," he said. "But I still believe in the guys in this locker room and I think we'll come out and bounce back next week against Hawaii."