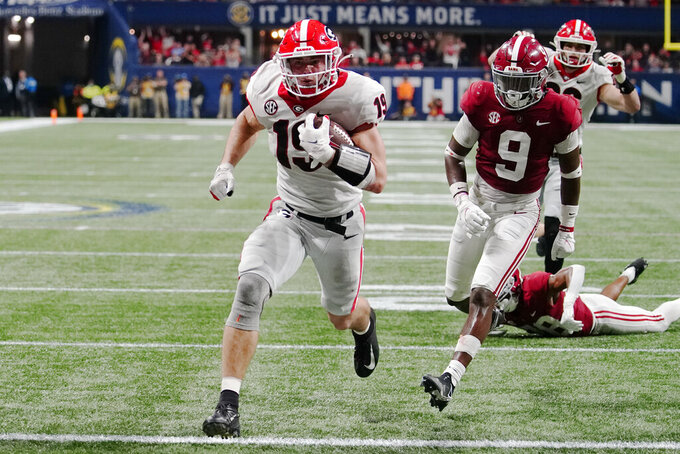 Georgia tight end Brock Bowers (19) runs into the end zone for a touchdown against Alabama defensive back Jordan Battle (9) during the second half of the Southeastern Conference championship NCAA college football game, Saturday, Dec. 4, 2021, in Atlanta. (AP Photo/John Bazemore) 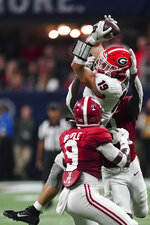 Just in time for the College Football Playoffs, No. 1 Georgia’s proud defense also lost its bid to be regarded as one of the best in recent history.

The Bulldogs, who led the nation in fewest yards and points allowed this season, were exposed by quarterback Bryce Young, wide receiver Jameson Williams and No. 4 Alabama’s powerful offense in Saturday’s 41-24 loss.

After entering the game ranked No. 1 in the College Football Playoff, Georgia is expected to remain in the top four when the playoff field is announced on Sunday.

“It didn’t do any damage,” coach Kirby Smart said of of his team's playoff hopes. “What it did was reinvigorate our energy. ... Unfortunately, it came in a setting like this.”

Georgia (12-1) had not been challenged all season. The Bulldogs’ stiffest tests came in a 41-17 win at Tennessee and a 30-13 home win over Kentucky.

Left tackle Jamaree Salyer, who started after missing four games with a foot injury, said the Bulldogs can turn the loss into a positive.

“I think more than anything we've got to come together as a team,” Salyer said. “It's all about how we respond. ... I feel like that wake-up call will help propel us.”

When asked if he believed 12 lopsided regular-season wins had left the Bulldogs complacent, Salyer said “I wouldn't say complacency. I would say sense of urgency. ... You can always have more sense of urgency.”

Halftime would have been a good spot for a renewed sense of urgency. A Georgia team which did not give up more than 17 points in a full regular-season game trailed the Crimson Tide 24-17 at the break.

Young then opened the second half with a 55-yard touchdown pass to wide receiver Jameson Williams, who had a 67-yard scoring catch earlier in the game. Williams dominated the defense with seven catches for 184 yards and two touchdowns.

Linebacker Nakobe Dean said all blame shouldn't be placed on the secondary.

“I feel like pass coverage and pass rush go hand in hand,” Dean said, adding Young “being able to keep his eyes downfield” while not facing significant pressure left too much burden on the defensive backs. Georgia was held without a sack.

Georgia's defense led the nation by allowing only 6.9 points per game in the regular season. The ease with which Alabama scored on five consecutive possessions cast a cloud of suspicion over the defense — and on the Bulldogs' regular-season schedule.

“A lot of people will say we didn't play nobody,” Salyer said before adding, “The SEC is the SEC. ... I think we earned the right to be in the College Football Playoffs."

Clearly, Alabama's offense was far more powerful than any unit the Bulldogs faced in their untarnished regular season.

Any suggestion that Alabama's impressive offensive showing was a fluke could be answered quickly with this reminder: The Crimson Tide also defeated the Bulldogs by the same 41-24 score in the 2020 regular season.

The proud Georgia defense was humbled as it allowed more yards passing in the first half — a championship-game record 286 by Young — than it had in any game this season.

“We had two or three third downs when we had a bust or cut a guy loose, and we hadn't done that all year," Smart said. “When you get these guys down, you've got to get off the field.”

When asked what strategy he might change if Georgia plays Alabama in the playoff, Smart said, “The first answer would be don't leave people uncovered.”

“You can't have those plays against a team like this, and they made us pay for it,” Bennett said.

A bright spot for Georgia was tight end Brock Bowers, who had 10 catches for 139 yards and a touchdown.

Williams' 67-yard scoring catch for Alabama's first touchdown in the second quarter was the longest gain — run or pass — against the Bulldogs this season.