Recent history says No. 2 Clemson, No. 3 ND should be wary 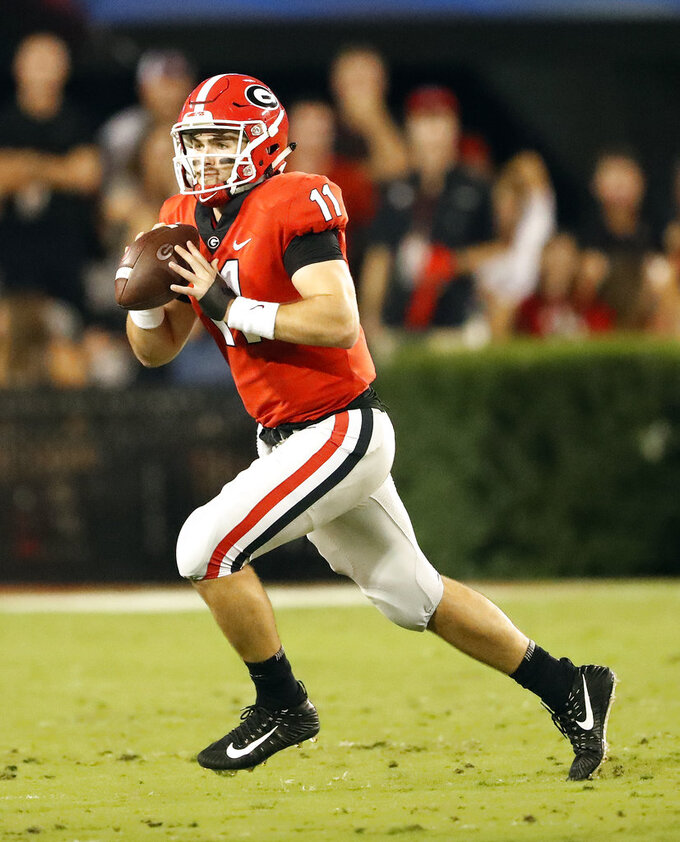 FILE - In this Oct. 6, 2018, file photo, Georgia quarterback Jake Fromm (11) is shown against Vanderbilt during the first half of an NCAA college football game, in Atlanta, Ga. No. 7 Georgia plays at No. 9 Florida on Saturday. (AP Photo/John Bazemore, File)

This is shaping up as a week of rest for many of the top playoff contenders.

No. 1 Alabama and No. 4 LSU have open dates this week as they prepare for their Nov. 3 showdown at Baton Rouge. No. 5 Michigan also is off before hosting No. 17 Penn State next week.

That leaves No. 2 Clemson and No. 3 Notre Dame as the only top-five teams playing this week. Clemson visits Florida State while Notre Dame faces Navy in San Diego.

Both should be on upset alert. Each of the last three weeks, a team ranked in the top five has lost. LSU was fifth when it fell to Florida on Oct. 6, Georgia was second before losing at LSU two weeks ago and Purdue upset a second-ranked Ohio State team last week.

Here's a rundown of some things to know heading into the season's seventh weekend.

No. 7 Georgia vs. No. 9 Florida in Jacksonville, Florida

Florida and Georgia are tied for the SEC Eastern Division lead with No. 12 Kentucky, which already beat Florida and will host Georgia next week. The Bulldogs and Gators also still hold out playoff hopes.

Each team's had two weeks to prepare for this game. Georgia will be playing for the first time since its 36-16 loss at LSU.

This game represents a second chance for Florida quarterback Feleipe Franks, who went 7 of 19 for 30 yards and was sacked five times in a 42-7 loss to Georgia last year . Florida had beaten Georgia three straight times before last year's game.

No true freshman has ever won the Heisman Trophy, but Moore is performing well enough that he should at least merit consideration for a trip to New York if he keeps up this pace.

Moore has gained 179.9 all-purpose yards per game to rank second among all Football Bowl Subdivision players , behind only Memphis' Darrell Henderson. Moore has 57 catches for 728 yards and seven touchdowns while also rushing for 163 yards on only 11 carries. And returns punts and kicks.

In Purdue's 49-20 victory over Ohio State, Moore caught 12 passes for 170 yards and two touchdowns. Moore will try to build on that performance Saturday when Purdue visits Michigan State.

6-1 — The road team has won six of the last seven meetings in the Oklahoma-Kansas State series. The only victory by a home team during that stretch was an Oklahoma 38-17 victory in 2016 . The eighth-ranked Sooners are at home and favored by 24½ over Kansas State.

54.5 — That's the punting average of Texas A&M's Braden Mann, which puts him on an NCAA record pace. The highest single-season average by an FBS punter who attempted at least 36 punts was 50.3, set by LSU's Chad Kessler in 1997.

No. 21 South Florida at Houston

South Florida, one of five remaining unbeaten FBS teams, will put that perfect record on the line Saturday when it visits Houston in the American Athletic Conference.

USF's Jordan Cronkrite has rushed for at least 100 yards in five straight games. Houston's defensive line features Ed Oliver, whose status for the USF game is uncertain after he bruised a knee last week in a 49-36 victory over Navy .

North Carolina was ranked 15th in November 2016 when it fell to Duke, starting a tailspin that hasn't stopped.

The Tar Heels dropped three of their last four games in 2016 - the lone win coming against FCS program The Citadel - and went 3-9 last year. North Carolina (1-5) carries a four-game losing streak into Saturday's game at Virginia.

Fedora is under contract through the 2022 season, a deal agreed to after the Tar Heels won the ACC's Coastal Division in 2015. A buyout could cost UNC around $12 million.