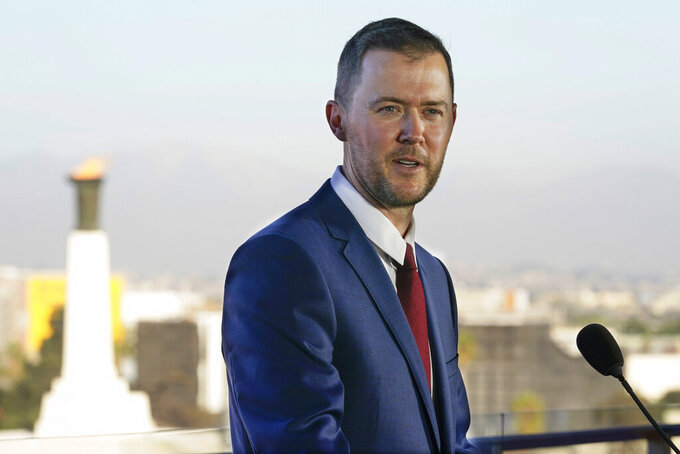 There is Lincoln Riley, the splashy new hire tasked with restoring the Trojans atop their historic perch at the pinnacle of West Coast college football, and Donte Williams, the interim coach asked to shepherd this year’s team through a lost season after the September firing of Clay Helton. Williams' stint will come to an end on the road against California on Saturday night.

While USC players insist they are focused on the game and ending a dire campaign with a win and good feelings, it was hard not to wonder if a spirited Tuesday practice was the result of having Riley and members of his 2022 coaching staff in attendance.

“I think the guys know what’s at stake,” sophomore wide receiver Gary Bryant Jr. said. “Obviously going into this week, I think that they know there’s a change in the future, but everybody’s locked into now. Like I said earlier, everybody’s focused on Cal, what we can do now.”

USC (4-7) cannot qualify for a bowl after a last-minute loss to No. 12 BYU on Saturday, but Riley will still get a chance to evaluate the roster he is inheriting in meetings, practices, and live competition because of a COVID-19 outbreak among the Golden Bears that forced that game to be postponed from Nov. 13 to this week, one day after the Pac-12 champion is decided in Las Vegas.

Riley watched practice alongside incoming defensive coordinator Alex Grinch, wide receivers coach Dennis Simmons and strength coach Bennie Wylie. They got a look at everyone from freshman quarterback Jaxson Dart to redshirt senior defensive lineman Nick Figueroa, who is eligible to play next season and has said he plans to return.

The next few days could give Riley a better sense of what players he can build around and what position groups will need to be upgraded on signing day and through the transfer portal.

“Like I say, every day is a job interview,” Williams said.

That's especially true for Williams, who has been central to USC’s efforts to bring in the best high school players after the program struggled in recruiting late in Helton’s tenure. Even with the support of recruits committed to the Trojans and admirers within the athletic department, there are no guarantees Williams will remain on staff.

Williams said he has yet to discuss his future with Riley, Grinch, athletic director Mike Bohn or anyone else.

Figueroa said it was easy to get caught up in the speculation over the past few months about who would be the next Trojans coach, with everyone from Iowa State’s Matt Campbell to Mike Tomlin of the Pittsburgh Steelers bandied about in the absence of concrete information from the search by Bohn and his chief of staff, Brandon Sosna.

When it became a possibility, and then reality, on Sunday that Riley would join USC after five seasons at Oklahoma, Figueroa was trying to process the news just like everyone else.

“I think everyone was pretty, like, shocked and excited,” he said. “The entire, like, Twitter world, we kind of saw that blow up before our eyes. And there’s a lot of positive optimism around our program. And I think we just want to keep that rolling into the next game and kind of use that to build momentum going into the next season, whether it be in recruiting or within our own team.”

Riley spent time on the phone during practice. Perhaps not coincidentally, touted 2023 quarterback prospect Malachi Nelson announced his commitment to USC later in the afternoon. Nelson, who attends Los Alamitos High School in Orange County, had been committed to Oklahoma before Riley’s departure.

“I think there’s a lot of potential here,” Figueroa said. “And it’s a match that starts a fire.”