Saban: Alabama OLB Allen 'most likely out for the year' 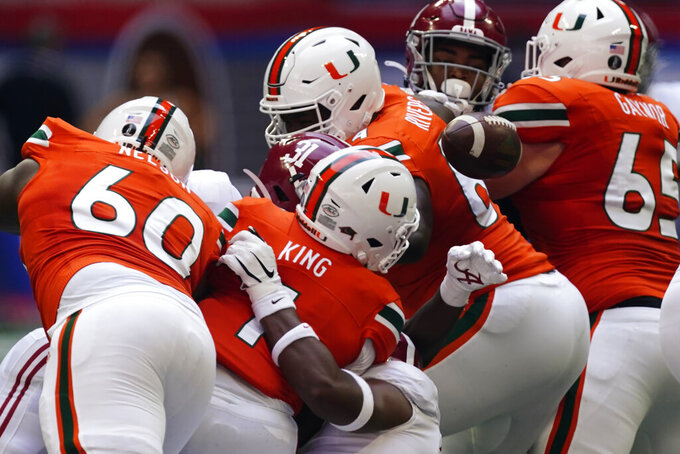 Miami quarterback D'Eriq King (1) fumbles as he is sacked by Alabama linebacker Christopher Allen (4) during the first half of an NCAA college football game Saturday, Sept. 4, 2021, in Atlanta. Alabama recovered the ball. (AP Photo/John Bazemore)

TUSCALOOSA, Ala. (AP) — Alabama outside linebacker Chris Allen has a fractured foot and could be out for the rest of the season, coach Nick Saban said Monday.

Allen was hurt on a sack of Miami quarterback D’Eriq King early in the second quarter of the top-ranked Crimson Tide's 44-13 opening victory on Saturday, forcing a fumble on the play. Saban said the injury will require surgery.

“He's most likely out for the year,” Saban said.

Drew Sanders, a five-star recruit in the 2020 class, replaced him and had six tackles. Sanders, who is expected to start in Allen's place, had nine tackles in 11 games last season.

Allen gave Alabama a formidable pass rushing duo at outside linebacker opposite Will Anderson Jr. He led the Southeastern Conference with 13 tackles for loss last season and had six sacks in his first year as a starter.

“Chris Allen is a fantastic player and he’s a really good pass rusher," Saban said after the game. "It really was a luxury to have him and Will on the edge as outside ’backers.”

Freshman Dallas Turner, one of Alabama's top-rated signees in the latest class, also could be in line for more playing time, along with redshirt freshman Chris Braswell.