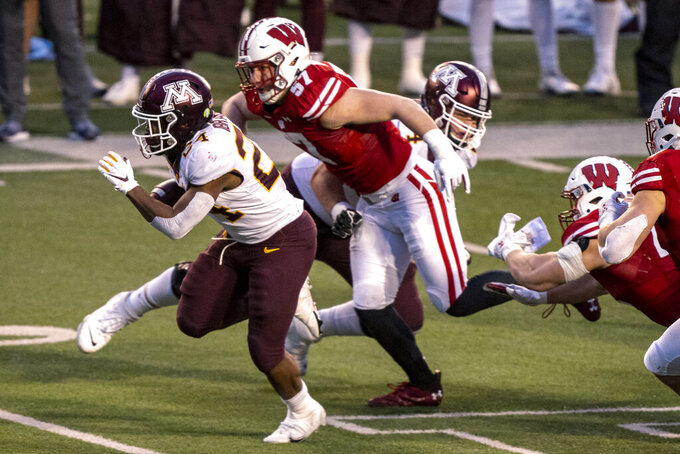 MADISON, Wis. (AP) — Wisconsin linebacker Jack Sanborn was making an impression in team meetings long before he started making plays on the field.

Now he’s making his presence felt in every respect as the top returning tackler on a defense that again should rank among the nation’s best.

Sanborn collected a team-high 52 tackles last season to help Wisconsin place fifth nationally in total defense and tie for ninth in scoring defense. He will lead Wisconsin’s defense again when the 12th-ranked Badgers open their season Saturday by hosting No. 19 Penn State.

“He’s done everything we’ve asked him to do since he stepped on campus,” defensive coordinator Jim Leonhard said. “The results have shown on the field.”

That includes his freshman season, when Sanborn was filling a reserve role but already showcasing his head for the game.

Wisconsin inside linebackers coach Bob Bostad remembers how a young Sanborn quickly picked up on everything he was getting taught to such an extent that even his older teammates could sense the freshman knew his stuff.

“I just love the game,” Sanborn said. “You always hear about how much of a mental game football is. If you can be great at that side of the game, it can open up a lot of opportunities for you and let you play free.”

Sanborn has worked on that by speaking freely in meetings, asking questions about schemes and discussing what should be done in specific circumstances.

“We’re obviously at different points in our careers, but I hope that I can help him just like a bunch of the older guys helped me when I was a freshman,” Sanborn said.

That mentorship has been going on in one form or another for several years.

Bryan Sanborn says Jack often would watch tapes of his high school games and give him advice on what he could do in particular situations.

“Being able to learn from him is just amazing access for me and all the younger guys in the linebacker room,” Bryan Sanborn said.

Long before that, they’d square off with each other as they grew up in suburban Chicago. Their competing never really stopped and carried over to various sports.

“I can remember Jack pitching a ball to Bryan, and Jack was maybe eight and Bryan is five,” said their mother, Malinda Sanborn. “And he’s whipping this ball... with no face protection, nothing, He’s like, ‘Mom, he’s fine. He can do it.’“

Jack, Bryan and the oldest Sanborn brother – Steven, now 24 – leaned on each other after the death of their father, former Oregon offensive lineman Paul Sanborn. Jack was only four when his dad died.

“They looked after me,” Bryan Sanborn said. “They told me to push harder when I was giving up. They were like my father figures.”

The siblings also say they owe plenty to their mother.

“She pushed us to accomplish our dreams,” Bryan Sanborn said. “She told us to always dream big. Don’t ever give up.”

Jack and Bryan Sanborn already have accomplished one goal by getting to this point. Jack has set quite the benchmark for his younger brother to follow by leading Wisconsin in tackles each of the last two seasons. His goal this year is to produce more big plays.

“On the field, in meetings or workouts, he’s a tremendous example,” head coach Paul Chryst said. “You point to how you want to approach it, he’s got that. He brings an energy along with it. He’s doing it in his style. There’s no question that he’s one of our leaders.”

He could continue Wisconsin’s penchant for producing NFL linebackers. Eight inside or outside linebackers from Wisconsin have been drafted since 2016, including Pro Bowl selections T.J. Watt and Joe Schobert.

Sanborn’s eager to join that list of Wisconsin linebackers in the NFL. Perhaps his guidance will eventually help his younger brother get there as well.