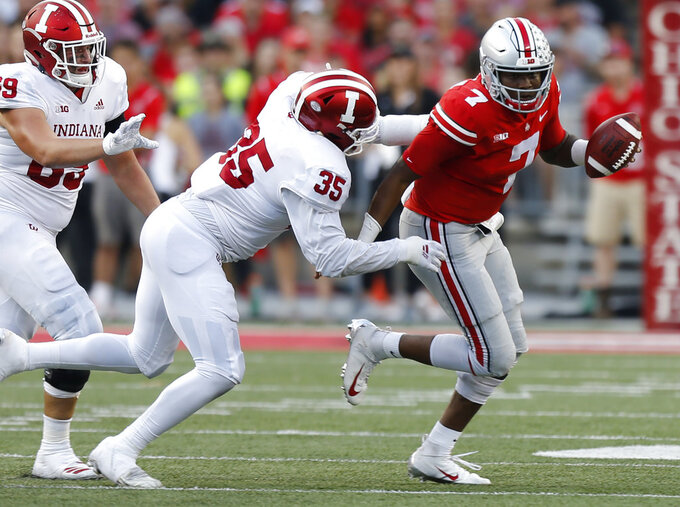 —Dwayne Haskins Jr., Ohio State, passed for a career-best 455 yards and six TDs as the No. 3 Buckeyes State pulled away in the fourth quarter to beat Indiana 49-26.

—Tua Tagovailoa, Alabama, passed for 334 yards and four TDs as the No. 1 Crimson Tide ran its winning streak against Arkansas to 12 straight with a 65-31 win.

—Jordan Ta'amu, Ole Miss, passed for 374 yards and accounted for five TDs in a 70-21 win over Louisiana-Monroe.

—Chandler Burks, Kennesaw State, rushed for four scores and passed for another in a 56-0 victory over Presbyterian.

—Anthony Lawrence, San Diego, threw for 354 yards and five TDs in a 51-34 win over Morehead State.

Texas quarterback Sam Ehlinger flashed the "Hook 'Em Horns" sign to the ecstatic burnt orange end of the stadium after his third rushing touchdown, and soon after that threw his second scoring pass.

A year after briefly putting the Longhorns ahead late in their Red River rivalry game against Oklahoma when he started as a freshman, Ehlinger had Texas ahead by three touchdowns going to the fourth quarter.

But Ehlinger still needed one more drive to win the game, and delivered, setting up freshman Cameron Dicker's 40-yard field goal with nine seconds left to give 19th-ranked Texas a 48-45 victory over the No. 7 Sooners after Kyler Murray had rallied them with three touchdowns in a six-minute span.

Ehlinger was 24-of-35 passing for 314 yards, and ran 19 times for 72 yards. He converted third-and-3 on Texas' final drive with a 4-yard keeper and his 8-yard draw to the middle of the field set up the winning kick in the highest-scoring game in the 113-game series.

It didn't matter who took the handoffs for No. 4 Clemson. All those long touchdown runs added up to a historic day that would make their late teammate proud.

Three Tigers rushed for at least 125 yards apiece, and the team rolled up 471 yards rushing in a 66-3 rout of Wake Forest.

They considered it a fitting tribute to C.J. Fuller, the running back on Clemson's national title team two years ago who died earlier in the week at age 22.

It was the first time in school history that Clemson had three players with at least that many yards apiece, and the first time since 2006 that they three in triple figures. The team rushing total was the program's best since 1981 and the fourth-best in its history.

15_Years since an ETSU player ran for three TDs before Quay Holmes did it against Gardner-Webb.