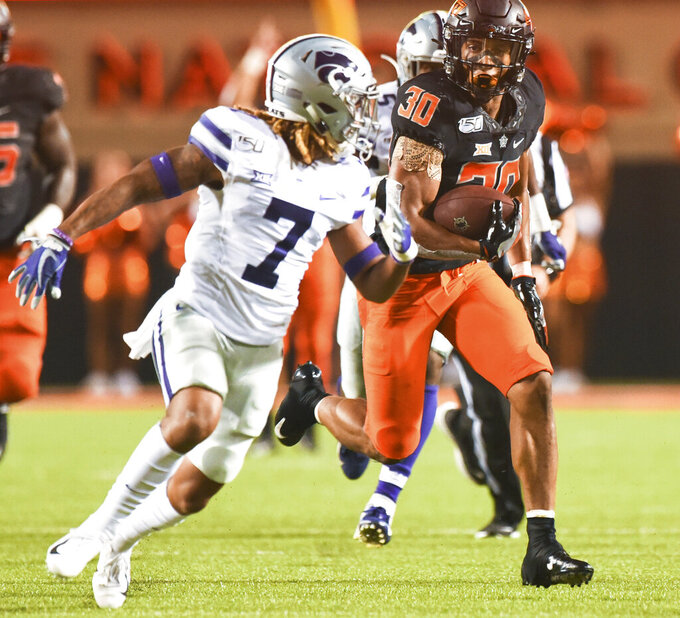 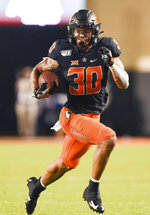 A year ago, hardly anyone outside the Big 12 had heard of Oklahoma State's Chuba Hubbard. One month into this season, the rest of the nation must be wondering how that could be.

Hubbard turned in his third 200-yard game over the weekend, running for 296 yards against Kansas State in the top rushing performance of the season.

The sophomore from Canada has 938 rushing yards, the third-best five-game total to open a season since 2010. Only Bryce Love of Stanford (1,088) and Leonard Fournette of LSU (1,022) had more over that span.

Hubbard broke runs of 53, 84 and 44 yards while becoming the first player to rush for at least 200 yards in the first five games of a season for the school that produced Barry Sanders and Thurman Thomas.

"I say this to everybody, but anybody could have done what I did today," Hubbard said after the 26-13 win. "There were big holes everywhere. I'm thankful to be in this position, but I just have to go up from here."

Hubbard is averaging 187.6 yards per game to lead the nation. That's well ahead of second-place Jonathan Taylor of Wisconsin, who is running for 139.8 per game.

Hubbard burst onto the scene late last season, taking over as starting running back because of Justin Hill's season-ending injury against Oklahoma on Nov. 10. He averaged 106.3 yards in four games.

This season he owns three of the nation's eight 200-yard games.

Layne Hatcher threw for 440 yards and four touchdowns against Troy in his first start for Arkansas State. He was granted immediate eligibility this season because he was a walk-on at Alabama.

Savon Scarver of Utah State became the latest player to return a kickoff 100 yards, going the distance against Colorado State . There have been six 100-yard returns through five weeks of the season; there were seven for the entire 2018 season.

Air Force tied Army for most rushing attempts in a game. The Falcons ran 69 times for 382 yards in a win over San Jose State a week after Army carried the same number of times for 403 against Morgan State.

The 69 runs wasn't all that impressive by Air Force standards. Last year, the Falcons ran a season-high 87 times against Utah State.

Wake Forest's 17 third-down conversions on 24 attempts against Boston College were the most since Texas Tech converted 20 of 25 against Oklahoma in 2016.