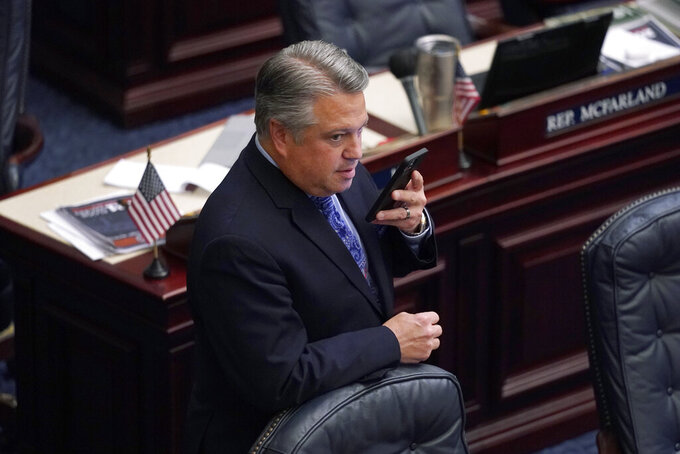 FILE - Rep. Chip LaMarca talks on his phone during a break in a legislative session April 29, 2021, at the Capitol in Tallahassee, Fla. With millions of dollars pouring into endorsements for college athletes, the latest battleground in the recruiting wars is the statehouse: A handful of states are already considering changing barely-dried rules to help their flagship schools land — or keep — top prospects. LaMarca is interested in tweaking a state law, to let schools get more directly involved in helping athletes make deals. (AP Photo/Wilfredo Lee, File)

With millions of dollars pouring into endorsements for college athletes, the latest battleground in the recruiting wars is the statehouse: A handful of states are already considering changing barely-dried rules to help their flagship schools land — or keep — top prospects.

Over the past three years, at least 25 states put laws or executive orders in place addressing name, image and likeness compensation for college athletes. All the measures make it clear that the NCAA can no longer limit this kind of revenue but some did set some ground rules.

It’s those restrictions, which vary from state to state, that are now getting a second look as competition to land the nation's top high school athletes heats up.

Alabama and Florida lawmakers are already considering repealing or making major changes to laws governing college athlete compensation less than a year after enacting them. Ohio State officials last week made it easier for their school to link athletes to big-dollar contracts.

The moves could be the start of a neverending effort to redefine the landscape for college recruiting where states try to constantly outdo each other, said Gabe Feldman, director of Tulane’s sports law program.

“If the latest state law is more permissive, then other states are going to have to follow suit, and will follow suit. That’s exactly what we’re seeing now," Feldman said. “Schools will do as much as they can do within the rules to compete. The only way to stay on a level playing field is to remove those state laws.”

In Alabama, a bill to repeal a 7-month-old college athlete compensation law sailed through the state House 97-1 and awaits action in the Senate.

“It may be the shortest-lived (bill) to stay in law ever,” said Alabama state Rep. Kyle South, the sponsor of both the law and the bill to dump it. “Pass it one year, repeal it the next.”

South said the two biggest schools in his state, Alabama and Auburn, support the repeal effort. Alabama has a 2022 recruiting class ranked among the best in the country and Auburn was top 20.

“They want to be able to go out on the recruiting trail and say, ’We’re playing by the same set of rules .... We’re on the same level playing field as Texas and Michigan,'” South said.

The rules mashup was created when court decisions and public opinion prompted a number of states, California first among them, to pass laws securing the right for athletes to earn endorsement money. With little choice, the NCAA on July 1 cleared the way for its athletes to start cashing in, laying down the barest of guidelines that bar pay-for-play and using endorsements as recruiting inducements.

Schools were told to create their own polices and follow any applicable state laws. And while many state laws share similar characteristics, they remain uneven. For example, states may have different rules regarding use of team logos in endorsements, or limit school involvement in connecting athletes to businesses. A few simply give wide latitude to their schools to write their own rules within the minimal guidelines of the NCAA.

“The simple fact is some states have a competitive advantage (for recruits) over others,” said South, the Alabama lawmaker.

Some Florida lawmakers want to eliminate the state’s ban on schools helping facilitate player endorsement deals. The change was proposed the same day Florida State lost a five-star recruit to tiny Jackson State; the sponsor of the measure insists the timing was a coincidence.

Florida state Rep. Chip LaMarca, author of the original law and the proposed change, said he is not interested in repealing the whole thing, just tweaking it to let schools get more directly involved in helping athletes make deals. LaMarca said he doesn’t want to eliminate other provisions, such as mandatory financial training designed to help athletes manage their contracts and earnings.

“Repealing the bill would not be about protecting the athletes,” LaMarca said.

His effort has struggled to gain traction, however. House Speaker Chris Sprowls this week called it a low priority while adding, "to a certain extent it’s like a race to bottom in college sports. Like, how many sports cars can we put in the hands of 18-year-olds?”

In Ohio, athlete compensation rules were set by an executive order from the governor. Buckeyes officials determined they could change their own rules to create a new program and have the school be a link between players and businesses.

“Our guidelines were initially created to be restrictive, but now that we have a better understanding of NIL, it’s clear that we can provide more assistance in connecting student-athletes with interested brands," Ohio State senior associate athletic director Carey Hoyt said. “Updating our NIL guidelines at this time is what we needed to do to stay competitive in this ultra-competitive landscape."

Buckeyes football coach Ryan Day welcomed the move. He described “uneasiness” among coaches and schools “because what one place can do maybe another place can’t, and trying to figure out what those norms are going to be because it’s so new. But we’re adapting fast.”

Being nimble is key amid the fierce competition. Supporters of major programs fight to stand out while giving a wink and a nod to the NCAA ban on using NIL deals as recruiting inducements. At more than a dozen major programs across the country, third-party “collectives” and nonprofits have formed to pool millions from businesses and donors to offer endorsement deals.

At Texas, for example, the Clark Field Collective said it had up to $10 million pledged to support NIL deals for Longhorns athletes. Days later, the nonprofit Horns with Heart launched with a promise of $50,000 annually to scholarship offensive linemen for NIL deals supporting charities.

Feldman cautioned that if a lot of states follow Alabama's effort to repeal rather than tweak their NIL laws, it would give the NCAA the chance to move in and create a new set of regulations.

“The states that are hamstrung are the ones with restrictions on school involvement and use of logos,” Feldman said. “I frankly think it would be a mistake to completely repeal as that would open up a space for the NCAA to step in.”