Swinney: No. 1 Clemson to play several new faces on D-line 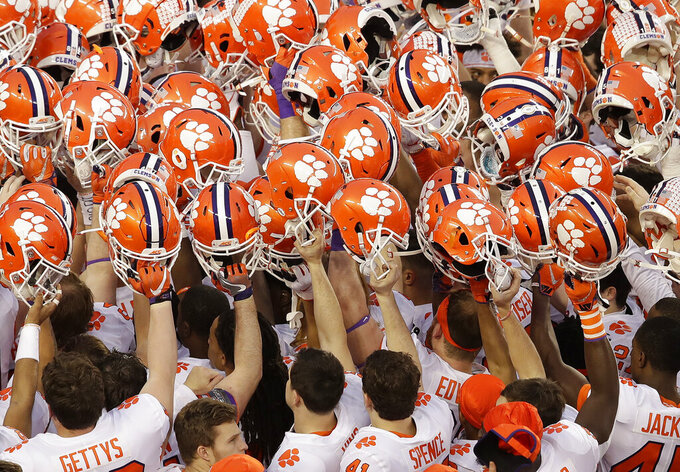 CLEMSON, S.C. (AP) — Clemson fans should get used to seeing several new faces on defense this season, especially up front.

Tigers coach Dabo Swinney said some of the competition to replace the seven vacancies from last year's national championship squad is so tight "we don't know who's going to run out there first."

Swinney will have to figure it out soon since No. 1 Clemson opens defense of its title Thursday night at home against Georgia Tech. Two starters are listed at three of the four defensive line positions on the team's opening depth chart with only senior Nyles Pinckney locked into place at defensive tackle.

Jordan Williams, a third-year sophomore, had carried the other starting tackle spot into fall camp, but has been pressured by Tyler Davis, a 6-foot-2, 295-pound freshman who arrived in January. Both end positions are in flux, too, with junior Justin Foster and sophomores Xavier Thomas and Logan Rudolph battling for the two starting spots.

"We've still got a couple of more days of practice and meetings," Swinney said. "I do know this. We're going to play a lot of guys. We've got a bunch of guys who are just like a big, ole pack."

Clemson didn't have such problems the past few years with ends Clelin Ferrell and Austin Bryant and tackles Christian Wilkins and Dexter Lawrence controlling the middle as the Tigers' defense gave up only 13.1 points a game, the fewest total in the Football Bowl Subdivision last year.

Ferrell and Wilkins, both All-Americans, and Bryant chose to return for their senior seasons and join Lawrence for one more chance at a national championship, which they helped the Tigers accomplish last fall.

Since the victory parade in January, much focus at Clemson has been on whether Swinney and defensive coordinator Brent Venables had groomed to take over after those rock-solid players had gone.

"It's definitely different," said Clemson center Sean Pollard who for several seasons had been pounded in practice by last season's defensive veterans.

Rudolph, the younger brother of ex-Oklahoma State and current Steelers quarterback Mason Rudolph, played 141 snaps over 14 games a year ago. Rudolph has brought an intensity, Swinney said, to his offseason practices and work habits that moved him to the top.

Thomas is a quick, 6-2, 265-pound player who came into the program last year as the country's top defensive end prospect. Thomas had several big moments a backup a year ago, including a crowd-pleasing blind-side sack of Syracuse quarterback Eric Dungey in the final moments to lock up Clemson's 27-23 victory. But Swinney said Thomas must develop the consistency to do it every down.

Rudolph believes he's done more than enough to earn a starting spot and is confident Clemson's line will be just as salty and strong this season.

"I think me and whoever they want to put out there would be great," he said with a smile.

First-year Georgia Tech coach Geoff Collins isn't concerned about Clemson's position battles. He's got his hands full changing the Yellow Jackets approach on offense and defense. Collins said he's also run his players through pre-game practices, all the way to their meal before they play.

"We want to be make sure that we've already done all of those things so that regardless of what environment we step into, we have a process and we have a way to do things," Collins said.

For Swinney, last year's defensive group was also the Tigers conscience, taking care of issues on their own that might've split apart other programs. It was Wilkins who took then new starting quarterback Trevor Lawrence out to breakfast a few days after popular veteran Kelly Bryant left the team after Lawrence was elevated to starter.

When a problem got to Swinney, the coach said Wilkins, Ferrell and senior linebacker Kendall Joseph were among the veterans who quickly stepped up to tell Swinney they'd take care of things.

"We don't have any alpha dogs up front," Swinney said. "But it's coming."