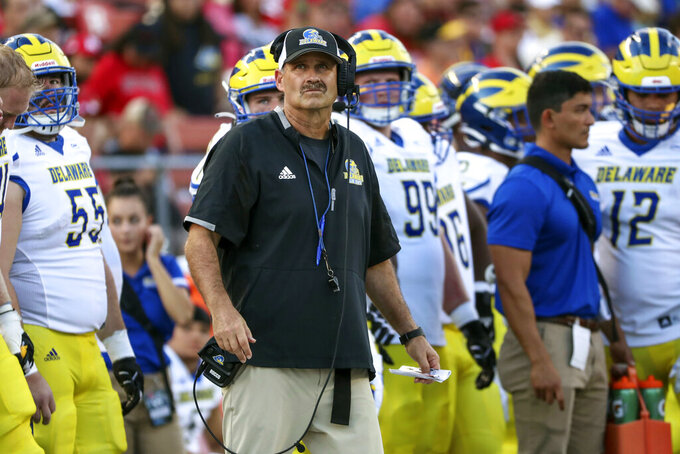 FILE - Delaware head coach Danny Rocco, center, watches from the sideline during the second half of an NCAA college football game against Rutgers, on Sept. 18, 2021, in Piscataway, N.J. Virginia Military Institute has hired Rocco as its football coach, the school announced Saturday, Dec. 3, 2022. (Andrew Mills/NJ Advance Media via AP, File)

“He is clearly someone who believes in developing his players into leaders of character in perfect alignment with VMI’s mission," Major Genera Cedric T. Wins said in a release. "I look forward to the future success that our cadet-athletes will enjoy from his leadership.”

Rocco has a 121-65 record after head coaching stops at Liberty, Richmond and, until this year, Delaware. He's also worked as an assistant at Virginia, Wake Forest, Maryland and Boston College, among other stops, and spent a season with the NFL's New York Jets.

As a head coach, Rocco has won seven conference championships (4 Big South, 3 CAA) in 16 seasons, including four in the Big South and three in the Colonial Athletic Association. His teams have made Championship Subdivision playoff appearances and twice reached the national semifinals — at Richmond in 2014 and Delaware in 2020.