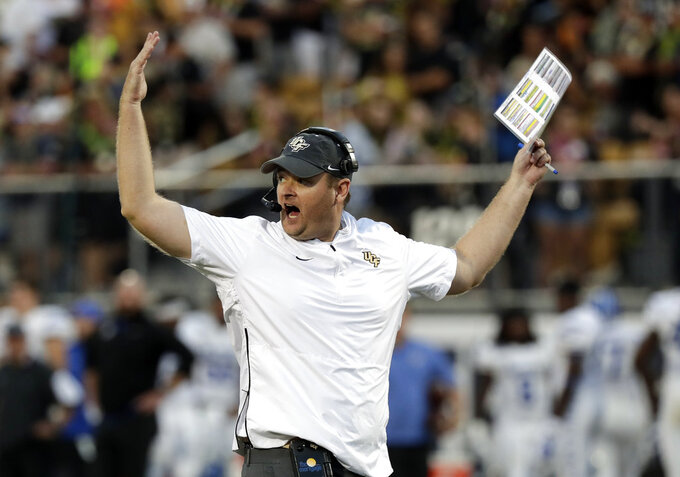 FILE - In this Dec. 1, 2018, file photo, Central Florida head coach Josh Heupel waves his arms during the first half of the American Athletic Conference championship NCAA college football game against Memphis, in Orlando, Fla. Heupel, Notre Dame’s Brian Kelly and Alabama’s Nick Saban are the finalists for The Associated Press national college football coach of the year after leading their teams to unbeaten regular seasons. The winner will be announced Monday, Dec. 17. (AP Photo/John Raoux, File) 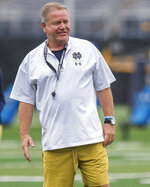 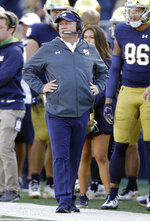 Notre Dame's Brian Kelly is The Associated Press college football Coach of the Year and the third coach to win the award twice since it was established in 1998.

Kelly joins Saban and TCU's Gary Patterson as two-time winners. Kelly was also coach of the year in 2012.

As he did in 2012, Kelly has guided the Fighting Irish to a 12-0 season and a chance to compete for the national championship. Notre Dame played Alabama in the BCS championship game after the 2012 season and lost 42-14. The third-ranked Irish will face No. 2 Clemson in the Cotton Bowl on Dec. 29 in their first College Football Playoff appearance.

This undefeated season for Notre Dame seems very different than that one and it comes just two seasons after Notre Dame finished 4-8. Kelly overhauled his staff and his approach after that debacle, bringing in new coordinators on both sides of the ball. He made a concerted effort to be more involved with all aspects of the team.

"I think I'm a better leader of our program," Kelly told AP. "The organization has gotten so much bigger. The ability to create the right energy and day-to-day culture is difficult. I think I've gotten a lot better a leading that large group on a day-to-day basis."

Kelly is 81-34 in nine seasons at Notre Dame and he credited his players for helping him improve as a coach.

The Irish rebounded to 10-3 last season and entered this season with similar expectations. After a 3-0 start, Kelly made the pivotal move of switching quarterback from senior Brandon Wimbush to junior Ian Book.

While the move might have seemed bold at the time, it wasn't necessarily to Kelly.

"It felt like the right thing to do," Kelly said. "You know where it felt risky was the first quarter of Wake Forest when we weren't moving the ball effectively. But at the time in making the decision I didn't feel risky. It felt like it was the right thing to do based on the information that I had. Clearly if you don't play well the next week and things don't go well it becomes an issue. Not only risky, but could become a huge problem."