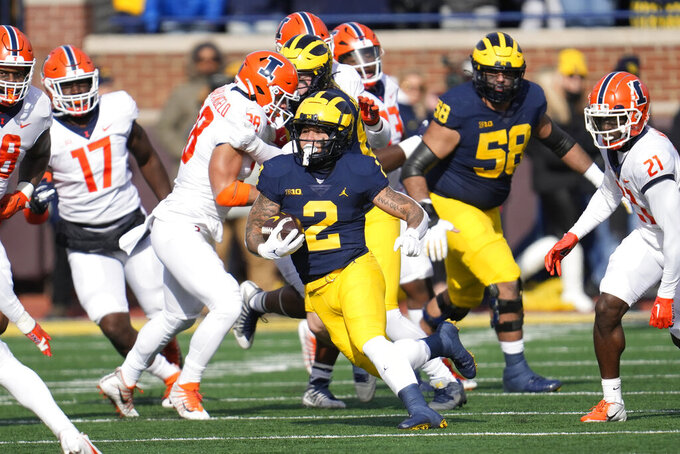 Michigan running back Blake Corum (2) runs the ball against Illinois in the first half of an NCAA college football game in Ann Arbor, Mich., Saturday, Nov. 19, 2022. (AP Photo/Paul Sancya)

Michigan star running back Blake Corum is expected to have surgery on his injured left knee that would cause him to miss the postseason, a person with knowledge of the situation told The Associated Press on Thursday night.

The person spoke on condition of anonymity because Michigan was not publicly disclosing Corum's condition.

No. 2 Michigan (12-0) plays Purdue in the Big Ten championship game Saturday night in Indianapolis and is likely heading toward its second straight College Football Playoff appearance.

Corum was injured late in the first half of the Illinois game two weeks ago on a low tackle. He tried to play last week against rival Ohio State, but after appearing on Michigan's first possession he was done for the day.

The junior was a Heisman Trophy contender before his injury. Corum ranks 10th in the nation in rushing at 122 yards per game and is tied for third with 19 touchdowns.

Without Corum, Michigan turned to Donovan Edwards against Ohio State. The second-year running back ran for 216 yards and two touchdowns on 22 carries against the Buckeyes and will play with an injured and heavily wrapped hand.

Behind Edwards is freshman CJ Stokes, who has run for 273 yards on 55 carries.