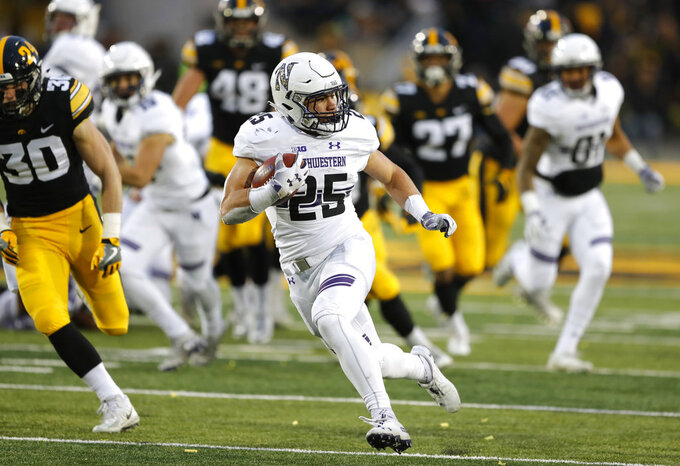 Northwestern running back Isaiah Bowser runs up field during a 34-yard touchdown run in the second half of an NCAA college football game against Iowa, Saturday, Nov. 10, 2018, in Iowa City, Iowa. Northwestern won 14-10. (AP Photo/Charlie Neibergall)

As No. 1 Alabama and No. 2 Clemson pummel almost everything sight, parity has swept through most of college football.

Right behind the Crimson Tide and Tigers is No. 3 Notre Dame, unbeaten, and a handful of highly ranked teams with one-loss. The drop off after that is stark. Only two teams in Power Five conferences have two-losses through 11 weeks. Compare that to the previous five years, when there was never less than seven two-loss Power Five teams at this point and as many as 10 in 2014 and last year.

As poll voter Matt Brown from The Athletic pointed out, 51 teams have appeared in the poll this season, matching the most for any season since the rankings expanded to 25 in 1989. The other year with 51 to be ranked at some points was 2008. The latest to debut this season was Northwestern.

Heat check takes a look at the voters' work this week and encourages a little more imagination in times of parity.

Next: vs. The Citadel

Good week for QB Tua Tagovailoa to rest that balky knee. Got to love that SEC grind.

QB Trevor Lawrence will be NFL-draft eligible in 2021.Plan to tank, accordingly.

The Irish rested their banged up QB against Florida State to save him for Syracuse. That statement really does sum up how this season has played out outside of the very top teams.

Karan Higdon has the first 1,000-yard rushing season by a Michigan running back since 2011 — which is almost hard to believe.

Conventional wisdom on the Bulldogs has been: not quite as good as last year's team. Well, with TB D'Andre Swift starting to hit stride, it's getting closer. Swift is averaging 9.9 yards per carry the last three games.

No, firing the defensive coordinator was not the solution. That doesn't necessarily mean it didn't need to be done.

The Mountaineers are the only team in FBS with two receivers with at least 10 touchdown catches — David Sills IV (12) and Gary Jennings Jr. (10).

Gardner Minshew II has 98 more completions than the next-closest quarterback in FBS and nobody spreads the ball around better. The Cougars' leading receiver (Dezmon Patmon) ranks 56th in the country with 52 receptions.

J.K. Dobbins has been held under 4.0 yards per carry in five of his last six games, getting at least 10 carries in each. Been a disappointing sophomore season for the talented back.

The Tigers are currently on pace to have their worst offense in yards per play (5.13) since 2009. This season has been one long magic trick for the Tigers.

Could the Knights beat Washington State and Ohio State? Maybe. The better question at this point is what have those teams done to really earn the benefit of the doubt and a better ranking?

Simply by averting the calamities that have befallen so many other Top-25 teams over the last month, the Orange have reached unthinkable — and probably unwarranted — heights.

The Longhorns pass defense has fallen apart under injuries and inexperience, allowing three straight games of at least 300 yards and 67 percent completions.

Next: at Colorado State.

Another team that has been propelled by the failures of others.

Heat check understands it's hard to believe, but, yes, this is what a top-15 team looks like in 2018.

Led by DEs Yetur Gross-Matos and Shareef Miller, the pass rush has become the Nittany Lions most reliable weapon. They are tops in the Big Ten and sixth in the country with 34 sacks.

Good week to get the offense going against the Beavers' woeful defense ahead of the Apple Cup.

Things got nasty at the end of the game against Baylor and a punch thrown by Big 12 leading rusher David Montgomery is likely to leave the Cyclones without the star tailback for the first half at Texas.

RB Michael Warren II is tied for second in the country with 17 rushing touchdowns.

Next: vs. Middle Tennessee.

The Wildcats have gone five straight games without breaking 17 points and are currently tied with Kansas for 109th in the country in scoring.

The Utes always seem to have another running back. Armand Shyne stepped in for the injured Zack Moss and ran for 174 yards against Oregon.

Can BC finish strong if QB Anthony Brown (unspecified internal injury) can't play? The uncertainty would have Heat Check looking for another team for this week's top 25.

Next: at New Mexico

The Broncos are back in the rankings and two weeks away from a monster Mountain West game against Utah State on the blue turf.

The Wildcats are the darndest team; hammered by injuries and not particularly good at anything but winning close games.

That defense is without a doubt worthy of a ranking, but the whole team?

Should be in: Reward Group of Five teams, UAB, Army and Buffalo. Should be out: BC, Northwestern, Mississippi State.