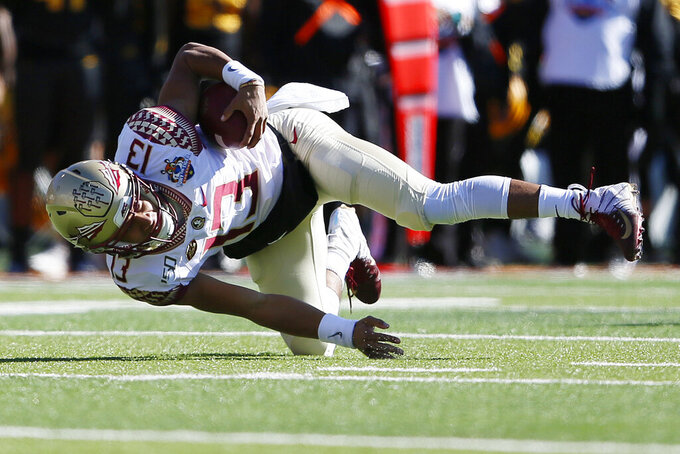 “Obviously it was a game not pleasing to the eye,” he said.

Willie Harts returned an interception 25 yards for a touchdown in the fourth quarter to lead Arizona State to a 20-14 victory against Florida State. Harts, a freshman cornerback, halted a 14-0 surge by Florida State (6-7) and helped the Sun Devils (8-5) hang on for their fourth Sun Bowl victory, despite not scoring an offensive touchdown.

“Our D was on fire tonight,” Harts added. “It just shows the potential for our defense.”

Blackman’s fourth interception of the game was returned by Harts to put the Sun Devils ahead for good with 10:06 left in the fourth.

“When you get six turnovers, you should probably win the game," Edwards said.

Jayden Daniels was named the game's MVP after going 12-for-28 passing for 198 yards to lead the Sun Devils. He also ran 36 yards and a 2-point conversion.

The first half was a comedy of errors for both offenses as the defenses stepped up in the absence of the teams’ star rushers. Eno Benjamin of ASU and Cam Akers of FSU both sat out to protect their NFL draft stock.

Florida State turned the ball over three times (two interceptions and a fumble) and had a field goal blocked, while Arizona State lost two fumbles.

“The guys played hard,” FSU interim coach Odell Haggins said. “We made a few mistakes. We’ve got to keep creating great habits. We turned the ball over ... we can play better. We are going to play better."

Cornerback Stanford Samuels also sat out for the Seminoles,

“I didn’t perform at the level my teammates needed me to perform," Blackman said.

By the end of the game, Arizona State was down three defensive starters – safety Cam Phillips didn’t dress, while cornerbacks Jack Jones and Chase Lucas suffered injuries during the game. Sun Devils defensive lineman Jermayne Lole also missed a chunk of second half.

Edwards was involved in an unusual celebration after winning the Tony the Tiger Sun Bowl — a bucket full of Frosted Flakes dumped over his head.

Arizona State linebacker Tyler Johnson had a fumble recovery late in the fourth quarter to end Florida State’s final threat. After the game, the sophomore announced he was retiring from football because of injuries.

Florida State: The Seminoles play their first game under Norvell against West Virginia in Atlanta on Sept. 5.