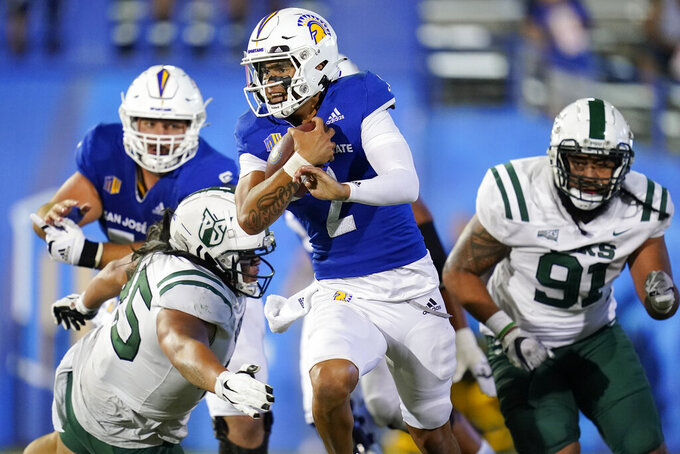 Line: Auburn by 23 1/2, according to FanDuel Sportsbook.

Auburn is trying for a successful five-game home stand to open the season. That means avoiding a misstep against San Jose State, especially with Penn State looming next. The Spartans are hoping to pull off the upset against a Southeastern Conference team.

San Jose St.: QB Chevan Cordeiro ran for two touchdowns and passed for a third in his debut with the Spartans. The Hawaii transfer passed for 239 yards and scored the go-ahead touchdown with 1:11 left in the season-opening win over Portland State.

Auburn: QBs T.J. Finley and Robby Ashford both saw significant action in the opener. But Finley was intercepted twice while Ashford flashed his dual-threat capabilities with a 49-yard run. Harsin said Finley remained the starter after the game, but playing time and roles will be something to watch.

Auburn has won 16 straight nonconference home games dating back to the 2016 season. ... The Spartans last game against an SEC team resulted in a 31-24 victory at Arkansas in 2019. ... Harsin went 3-1 against San Jose State while at Boise State, where he won three Mountain West Conference titles and six division championships. ... Auburn had an 87-minute weather delay against Mercer, the team's first interrupted game since 2018 against Southern Miss. ... The Tigers have held their last six opponents without a rushing touchdown, the longest streak in six years. ... San Jose State's 21-17 win over Portland State was the program's 500th.