BC beats Mizzou 41-34 in OT on Flowers catch, Sebastian INT 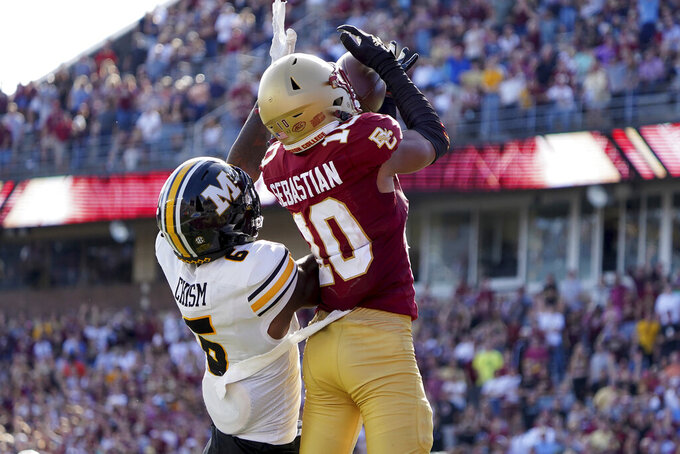 BC coach Jeff Hafley said he couldn’t see Sebastian come down with the ball to end the game. But he figured it out when the fans came streaming onto the field to celebrate the first-ever meeting between the schools, and the Eagles' first 4-0 start since Matt Ryan led them to eight straight wins to start the 2007 season.

Travis Levy scored from 5-yards out to give BC a 34-31 lead with 25 seconds to play in the fourth, bouncing off one defender at the 1 and scampering in. But Connor Bazelak led the Tigers (2-2) to the Eagles’ 39 and Harrison Mevis barely cleared the crossbar with a 56-yard field goal as time expired in regulation.

BC had the ball first in overtime and advanced to the 9 on a third-down pass to Levy. After Levy was stopped for a loss of 1, Grosel found Flowers open on the left side of the end zone.

“He’s like a dog with a frisbee," said Grosel, a walk-on who took over as starter when Notre Dame transfer Phil Jurkovec injured his wrist in Week 2. "I throw it up there and he goes up and gets it.”

Bazelak went for the score on the Tigers' first play, but Sebastian leaped in front of the receiver at the goal line and came down with the ball to end it.

“That was the best play I’ve ever had playing football," said Sebastian, who confessed that he was in the wrong coverage. “I saw the man release and I saw the quarterback and I was thinking, ‘He’s going to throw it deep.’ I just tried to make a play.”

BC led 27-17 to start the fourth quarter, but the Tigers went ahead 31-27 on Badie’s second TD, an 8-yard run. The Eagles started at their own 40 after Missouri committed a personal foul on the ensuing kickoff — which went for a touchback anyway.

Grosel led them on a 15-play scoring drive that ate 5:53 off the clock and left the Tigers just 25 seconds. Bazelak completed a 19-yard pass to Barrett Banister and a 12-yarder to Keke Chism before their final timeout at the BC 44 with 6 seconds left.

With Doug Flutie in the crowd — he posed for pictures with fans in front of the “Hail Flutie” statue outside Alumni Stadium after the game — Missouri opted against a long heave and threw an out to Banister at the 39 to set up Mevis' kick with 3 seconds left.

“We had them on the ropes the whole second half and that kid made that field goal," Grosel said.

Missouri: Coach Eliah Drinkwitz raised eyebrows when he said he would have rather faced a regional rival in the Tigers' recruiting area than schlep out to Boston. With the loss, he can be sure he won't end his signing drought in the state.

“It was a great day for the Commonwealth of Massachusetts,” Hafley said to begin his postgame news conference.

Boston College: The Eagles won their first three games against non-Power Five schools by a combined score of 124-31. With a win over the first Southeastern Conference school to visit Chestnut Hill since 1987, they have one that means something.