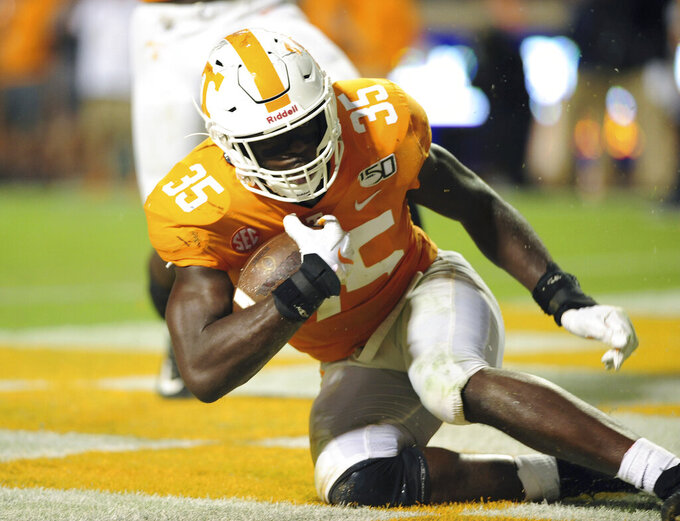 Tennessee linebacker Daniel Bituli gets to his feet after recovering a blocked punt against South Carolina during an NCAA college football game in Knoxville, tenn., Saturday, Oct. 26, 2019. (Scott Keller/The Daily Times via AP)

Bituli has earned his teammates’ respect for the way he has fought through injuries and coaching changes to emerge as a steadying force for a program that has dealt with plenty of instability over the years.

He also has taken a much different trek than most of his teammates to big-time college football in the Southeastern Conference.

Born in the Congo, Bituli was just 1½ years old when his family left that country in search of a better life. They stayed at a refugee camp in Cameroon before settling in Tennessee when Bituli was about three. The Bitulis had no friends or relatives in Tennessee when they first arrived.

“Football’s hard, but the things I went through growing up was definitely harder,” Bituli said. “It’s a life-and-death situation.”

Bituli spent his early childhood adapting to a new country and learning English while his father worked two jobs. He said watching the sacrifices his parents made taught him the power of perseverance.

Those lessons have paid dividends on the field with Bituli on pace to lead Tennessee in tackles for a third straight season.

“What I don’t want to do is come in and blame someone else for the mistakes I’ve done,” Bituli said. “I just want to keep on fighting. That’s something my parents have preached to me from a young age. No matter what situation you’re in, just keep fighting. You’re ultimately in control of your own destiny.”

While adjusting to life in Tennessee, Bituli also dealt with more typical family challenges as he competed with his two older brothers.

Bituli said life as a younger brother taught him “just to have a stronger mindset and just to be aggressive” to avoid getting picked on.

One of his brothers, Roland, said the Bituli boys loved to watch wrestling. They often wrestled one another at home while copying the moves they saw on television.

“He was the smallest, so he’d try harder to compensate for his lack of size,” said Roland, one of five Bituli siblings.

Daniel Bituli now is stands 6-foot-3 and weighs 252 pounds, but he displays that same aggressive approach on the football field.

He has been named the SEC defensive player of the week twice during Tennessee’s current three-game winning streak. Bituli is coming off a 19-tackle performance in a 17-13 victory over Kentucky in which he helped preserve the win by teaming up with Ja’Quain Blakely to stop Lynn Bowden Jr. on fourth-and-goal from the 2-yard line with 1:17 left.

“One thing going into football that I said somebody would never question, that’s my work ethic,” Bituli said. “At the end of the day, football’s a physical sport. When you hit somebody, it’s mano a mano. It’s a man thing. It’s really a pride thing. I really pride myself on not letting anyone run through me.”

Bituli is a difference-maker on Tennessee’s defense.

He missed Tennessee’s first two games while recovering from offseason knee surgery. While Bituli was sidelined, Tennessee fell 38-30 to Georgia State and blew a late lead in a 29-26 overtime loss to BYU.

Tennessee’s defense has improved dramatically since his return. Tennessee (5-5, 3-3 SEC) has allowed just 20 points over its last 10 quarters heading into its game Saturday at Missouri (5-5, 2-4).

Bituli has a team-high 62 tackles despite missing those first two games. Teammates credit him for making sure everyone’s in the proper spot before the ball is snapped.

“He’s a guy that, to me, has worked extremely hard to learn the ins and outs of what we’re trying to do on the defensive side of the ball,” Tennessee coach Jeremy Pruitt said. “He’s an instinctive guy. He’s a tough guy. He works hard at it to be a good player. So, we’re glad he’s back and I’m glad to see that he’s having the success that he’s having.”

Bituli’s success will likely extend beyond the football field, if he can follow the examples of his older brothers.

His oldest brother, Randy, is now in the Navy. Roland — who did not play football for the Vols — graduated from Tennessee and is working for Merrill Lynch in Nashville.

Their dad understandably couldn’t be prouder. They’ve come a long way since leaving the Congo.

“I thank God,” said Bituli’s father, Patrice Bituli. “I thank America. To see my children prospering like that, what can I say? I just say, ‘Thank you, Lord.’“