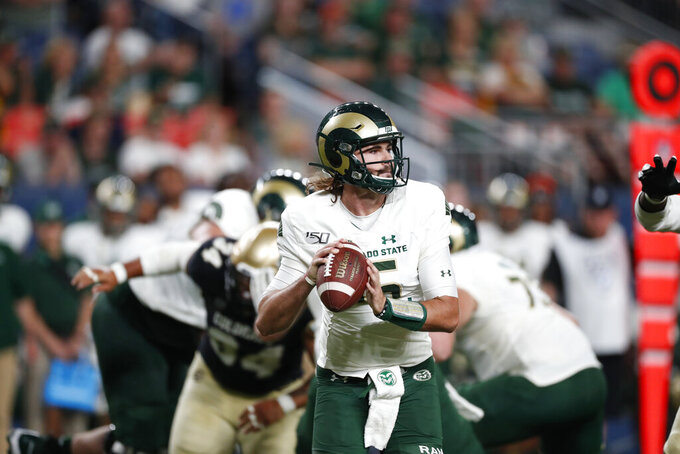 COLUMBIA, S.C. (AP) — Collin Hill has never backed away from a challenge, especially if it meant getting back on the field at his home state university.

Hill overcame rehabbing from a third ACL tear this spring and bonding with new teammates as a graduate transfer from Colorado State to win the starting quarterback job over last year's incumbent in Ryan Hilinski.

“I think both had good days,” Bobo continued. “But over the long haul, (Hill) had more consistent days.”

Though Hill had an edge after previously playing in Bobo's system.

But with the decision made, Hill will come out first when South Carolina opens the season at home against No. 15 Tennessee on Sept. 26.

Bobo said Hill's toughness impressed teammates. Then again, the fifth-year player has shown that quality throughout his career.

Hill is from South Carolina's Upstate region in Moore and played at high school power Dorman, where he led the program to a state championship game and still holds records for career passing yards and touchdowns.

After Dorman coach Dave Gutshall learned about Hill's third knee injury in a game at Arkansas last year, he told Hill he could become his high school's quarterbacks coach if he didn't want to continue playing.

“Coach,” Gutshall recalled Hill telling him, “I think I want to get back on the field.”

To do that, the 6-foot-4, 222-pound Hill needed to find a new home after Bobo's departure from the Rams. Bobo was looking for a leader who could help South Carolina's young quarterbacks — Hill's prime backups are sophomore Hilinski and freshman Luke Doty — learn his system.

It was not a completely smooth transition. While South Carolina went through five spring practices before the global pandemic shut down all group activities, Hill spent much of that team rehabbing his knee.

But Hill was active and helpful on Zoom sessions, Bobo said. By the time team workouts began in the summer, Hill demonstrated the ability to move around without worries about his knee.

Hill was South Carolina's top offensive player during a second scrimmage as he gained momentum behind center that continued the rest of the way.

“It’s awesome to be back home, to be close to family, to play at a school like this growing up down the road,” Hill said earlier this month.

Hill has started 11 games his his career, throwing for 3,233 yards, 23 touchdowns and 11 interceptions at Colorado State. He has had five games with 300-plus yards passing.

Hilinski handled the news well, Bobo said. The 6-3, second-year passer was forced into the starting role last year when four-year starter Jake Bentley was lost for the year with a foot injury in the season opener.

Hilinski threw for 2,357 yards, 11 touchdowns and five interceptions last season. He had surgery to repair a meniscus tear in his left knee last December, but figured to have enough of a handle on the job that Bentley transferred to Utah despite having a year of eligibility left.

Hilinski is the younger brother of late Washington State quarterback Tyler Hilinski, who committed suicide in 2019. Ryan's family has a foundation, Hilinski's Hope, designed to raise awareness of the mental health challenges of student athletes.

At games last season, South Carolina players, coaches and fans would hold up three fingers in honor of Tyler Hilinski before the start of the third quarter.

Bobo said Hilinski didn't sulk or take a day off after losing the job.

“Obviously, everybody in that (quarterback) room wants to be the starter,” Bobo said. “Everybody knows the ultimate goal is for South Carolina to win.”

Bobo said he and Hilinski talked about how he could improve and the quarterback had two strong practices since the decision.

And nothing is written in stone going forward because of the all the unknowns from the global health crisis.

Bobo said he hadn't ever prepared as many quarterbacks for action in a summer camp as he has this year to make sure the Gamecocks are ready if players must miss time due to quarantine.

“With the pandemic, we felt like we needed to continue to get guys more reps” with the first team, Bobo said.