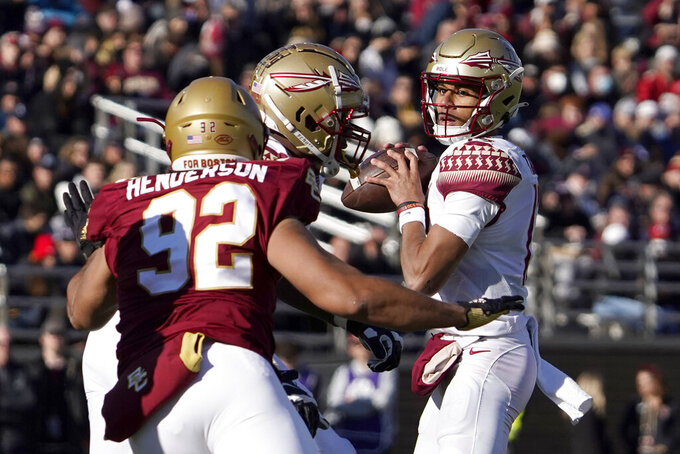 GAINESVILLE, Fla. (AP) — Running back Malik Davis, one of a dozen Florida players dealing with a second coaching change in their college careers, got a chance to address teammates earlier this week.

His message was simple and succinct.

“Even though we don’t have the same goals that we had at the beginning of the year, we still have a lot to play for,” Davis said. “We have one another to play for, our families, the name on the back of the jersey.”

Florida will host rival Florida State (5-6) with bowl eligibility and bragging rights on the line Saturday. It’s the first time in 40 years that the programs with a combined six national championships will play a winner-in, loser-out regular-season finale.

It would be a surprise to see the Gators flop considering they fired coach Dan Mullen last week. Mullen was let go following his fourth loss in five games, a 24-23 overtime stunner at Missouri. It was Florida's ninth loss in its last 11 games against Football Bowl Subdivision teams and came a week after Mullen's team escaped a near-debacle against lower-division Samford.

So now, after feeling torn apart, they will try to pull together and beat the Seminoles for the third consecutive time. Florida is a 2½-point favorite, according to FanDuel Sportsbook.

“Still one of the biggest rivalries in college football,” Florida defensive end Zach Carter said. “So it would mean a lot to go out with a win.”

It probably would mean more for Florida State, which is starting to find its footing in coach Mike Norvell’s third season. The ’Noles have won five of seven, including two in a row, after an 0-4 start.

This will be Norvell’s first taste of the storied series. The teams didn’t play last year because of COVID-19 scheduling.

It’s also the second straight meeting that features an interim coach. Odell Haggins stepped in for fired FSU coach Willie Taggart in 2019, and now Greg Knox is filling in for Mullen.

“It’s one of the great games that college football provides. To be a part of it, to say excited would be an understatement,” Norvell said. “Is our record where we want it to be? No. But throughout this season, there’s been a lot of lessons learned. To put ourselves in position to gain one more is big. It’s big for our players.

“It’s like I told them: they put themselves in a position to be remembered.”

FSU is trying to sweep its Sunshine State rivals for the first time since 2016, when Jimbo Fisher was the head coach. Fisher accomplished the feat six times in his first seven years (2010-16) in Tallahassee.

The Seminoles had lost four in a row to Miami before rallying to beat the Hurricanes 31-28 two weeks ago. They haven’t knocked off the Gators since 2017, when Florida had interim coach Randy Shannon running the show after it fired Jim McElwain.

Shannon is now on FSU’s staff, serving as a senior defensive analyst.

Florida quarterback Emory Jones sustained a minor ankle injury during practice this week that could hamper him — or maybe even sideline him — against the Seminoles.

Anthony Richardson replaced Jones in the starting line against top-ranked Georgia last month, but Richardson struggled and was eventually knocked out of the game with a concussion. He injured a knee dancing in the team hotel the night before playing at South Carolina the following week and was banged up in practice last week.

Knox said he expects Richardson to play, if healthy. He might not have a choice.

Florida athletic director Scott Stricklin doesn’t want to wait long to fill the team’s coaching void. He would like to have Mullen’s replacement in place in a matter of days, not weeks.

Although Stricklin has kept his top target quiet, he is expected to at least interview Louisiana’s Billy Napier. Napier acknowledged Wednesday being pursued.

“There is no decision yet,” Napier said following practice.

Napier appears firmly in the mix at Florida and Virginia Tech, and also could be a candidate at LSU. Napier’s resume includes stops at Alabama under Nick Saban and Clemson under Dabo Swinney.