Centeio leads JMU in 47-7 romp of No. 23 Coastal Carolina 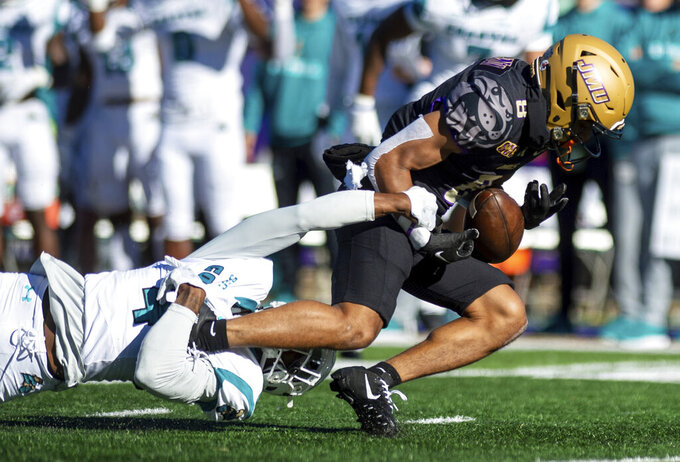 James Madison wide receiver Kris Thornton (8) tries to hang onto the ball as he gets tackled by Coastal Carolina safety Tobias Fletcher (4) during the first half of an NCAA college football game in Harrisonburg, Va., Saturday, Nov. 26, 2022. (Daniel Lin/Daily News-Record via AP)

HARRISONBURG, Va. (AP) — James Madison knew when it made the jump to the Bowl Subdivision this season that conference championships would not be available right away because of NCAA transition rules.

So the Dukes turned their final game of the year into a bowl game and came away with no doubt about who the Sun Belt Conference's East Division champion is, routing No. 23 Coastal Carolina 47-7 on Saturday.

Todd Centeio threw for four touchdowns and ran for a fifth and James Madison (8-3, 6-2) dominated in every phase, outgaining the Chanticleers 502 yards to 183.

When the game ended, Queen's “We Are the Champions” blared through the stadium.

“Everyone knows who JMU is now,” said wide receiver Kris Thornton, who became the first in school history to go over 1,000 yards receiving twice. “We won the East.”

The Chanticleers (9-2, 6-2) were the first visitor in the AP Top 25 to ever play at Bridgeforth Stadium, but they did so without starting quarterback Grayson McCall. Their only score came on their second drive on Jarrett Guest's 34-yard pass to Tyson Mobley.

“We lost badly mentally because we let the game get bigger than what it was supposed to be,” nose tackle Jerrod Clark said.

James Madison trailed 7-6 before Centeio hit a wide open Reggie Brown for a 34-yard TD on its second drive of the second quarter to put the Dukes ahead. He then hit Devin Ravenel in the back of the end zone from 26 yards on the next drive. On the play, Ravenel made a dazzling catch over the top of the defender in very tight coverage.

A 17-yard strike to Drew Painter just over two minutes into the third quarter and Latrele Palmer's 13-yard run made it 33-7 midway through the quarter, and an 8-yard pass to Ravenel with 16 seconds left in the quarter gave Centeio his fourth game with at least four touchdown passes this season. He added an 11-yard TD run in the fourth quarter.

Coastal Carolina: The Chants, with McCall, were the only team in the Group of Five with one loss, but they are a different team without him and his 21 TDs vs. just one interception. They gained 75 yards on their scoring drive and only 109 the rest of the game.

“We can't let this game roll over into the championship game,” Clark said.

JMU won Football Championship Series national titles in 2004 and 2016 and appeared in two other title games.

Coastal's stay in the AP Top 25, like James Madison's earlier, will last only one game. The Chants were ranked last week, when their game against Virginia was canceled.

The Chanticleers will face either Troy or South Alabama for the Sun Belt championship next Saturday.

The Dukes' season is over because of their FBS transition. They will be eligible for a conference title and bowl bid in 2024.