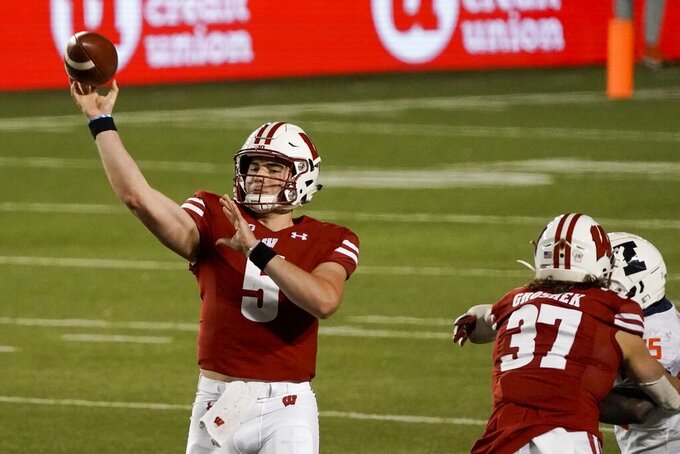 Wisconsin coach Paul Chryst said Thursday he was “hopeful” about his quarterback situation as Graham Mertz attempts to come back in time for this weekend's game with Michigan after testing positive for COVID-19 last month.

Mertz tied a school record by throwing five touchdown passes in his first career start but tested positive afterward as part of a COVID-19 outbreak in the program that caused the 13th-ranked Badgers to cancel games with Nebraska and Purdue the last two weekends.

He tested positive early enough to enable him to play Saturday while meeting Big Ten protocols that state an athlete can’t return to action until at least 21 days after his positive test. Chryst said this week that he’d have to see if Mertz get enough practice time to be ready.

“Continue to be hopeful of it,” Chryst said. “Whoever’s going to play, I feel good with it. I do feel confident. Their experience level might be different, but I think that’s part of our (job) is to make sure we give them a plan they can be successful with.”

Coan was the Badgers’ starting quarterback last year but injured his right foot in preseason practice, underwent surgery last month and remains unavailable. Coan’s injury caused Mertz to take over, and the redshirt freshman responded by going 20 of 21 for 248 yards against Illinois.

The Milwaukee Journal-Sentinel reported that Wolf tested positive for COVID-19 after the Illinois game. Wolf and Vanden Boom have one career pass attempt each.

Chryst said Thursday he didn’t have a set timetable for when Coan might be able to return but added that the senior has been progressing well since his Oct. 6 surgery.