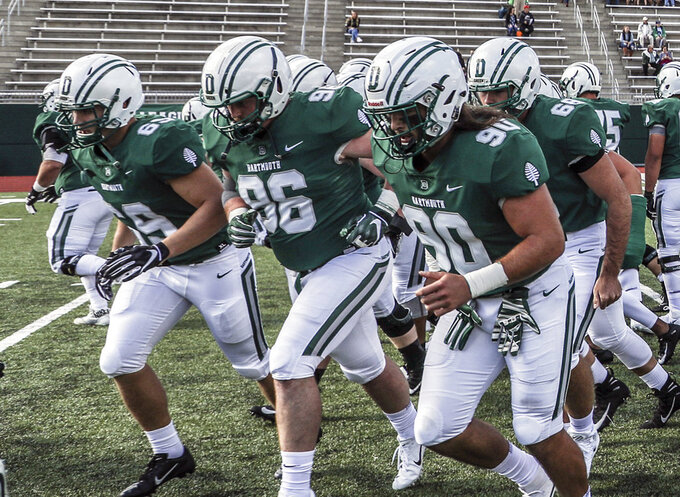 In this Sept. 29, 2018, photo provided by Dartmouth College, Seth Simmer (96) is flanked by Tommy Ciesla (69) and Niko Lalos (90) during warmups before an NCAA college football game between Dartmouth and Penn in Hanover, N.H. During his freshman season at Dartmouth, Seth Simmer was having trouble hearing the linebackers call signals from his defensive tackle spot just a few yards away. What was first diagnosed as an ear infection brought on by a severe head cold turned out to be a brain tumor that was making him deaf in his left ear. Simmer is one of 30 nominees for the Mayo Clinic Comeback Player of the Year Award. (Tom McNeill/Dartmouth College via AP)

During his freshman season at Dartmouth, Seth Simmer was having trouble hearing the linebackers call signals from his defensive tackle spot just a few yards away.

What was first diagnosed as an ear infection brought on by a severe head cold turned out to be a brain tumor that was making him deaf in his left ear.

Simmer had surgery to remove the tumor in the summer of 2017 and didn't return to school until the winter of 2018. Unsure about his football future, Simmer rejoined the team and by the spring game he was convinced he could compete.

Simmer is one of 30 nominees for the Mayo Clinic Comeback Player of the Year Award. Winners will be chosen in FBS, FCS and non-Division I NCAA football, and revealed on Dec. 18. They will be honored at the Fiesta Bowl on Jan. 1 in Glendale, Arizona.

Among the other notable nominees:

— Syracuse quarterback Eric Dungey, whose 2017 season was cut short by a broken foot. He returned this year to lead the Orange to a 9-3 season and their first bowl appearance since 2013.

— Washington cornerback Jordan Miller, who broke his leg midway through the 2017 season and needed additional surgery this past spring. He returned to a starting role on one of the best pass defenses in the country.

— South Carolina receiver Deebo Samuel, who broke his leg three games into the 2017 and came back this year to lead the Gamecocks with 62 catches for 882 yards and 11 touchdowns.

Persistent difficulty hearing and sinus pressure finally led Simmer to get checked out at Dartmouth Medical Center in the spring of 2017. An MRI revealed the tumor.

"I was dumbfounded," Simmer said. "To me it seemed huge and it looked huge on the screen. I actually asked the doctor to take it down. I didn't want to look at it. I just wanted to figure out what the next step was."

That was surgery, which was done at the Mayo Clinic in Rochester, Minnesota, in July 2017. Simmer's hearing would not return. He was also concerned about the left side of his face being paralyzed and his balance being permanently affected by nerve damage. Simmer recalled asking a nurse in the hospital if his bed was moving when he came to after surgery.

He was laid up for months and had to retrain his body to steadily stand and walk.

"My head hurt. I didn't have balance enough to do anything. I couldn't lift anything heavier than a gallon of milk for ... way too long," Simmer said.

Simmer, who played this season at 285 pounds, ballooned to 310 from inactivity, but started feeling better through the fall and decided to return to Dartmouth for the 2018 winter semester — just in time for football conditioning. He was horribly out of shape, but otherwise OK.

"All I knew is I would give it a try and if I couldn't play again I was happy with where football had taken me and if I was done playing I would not be upset," Simmer said. "But I was going to give it a shot. If my body tells me no that's fine."

Simmer was part of a 9-1 team that came up just short of an Ivy League championship. The Georgia native from Powder Springs, just northwest of Atlanta, finished the season with 11 tackles and a fumble recovery, and was in on a safety against Princeton in the game that decided the Ivy title.

He plans to play two more seasons for Big Green.

"A lot maturation happened during that whole process," Simmer said. "It makes you thankful for all the things you have."