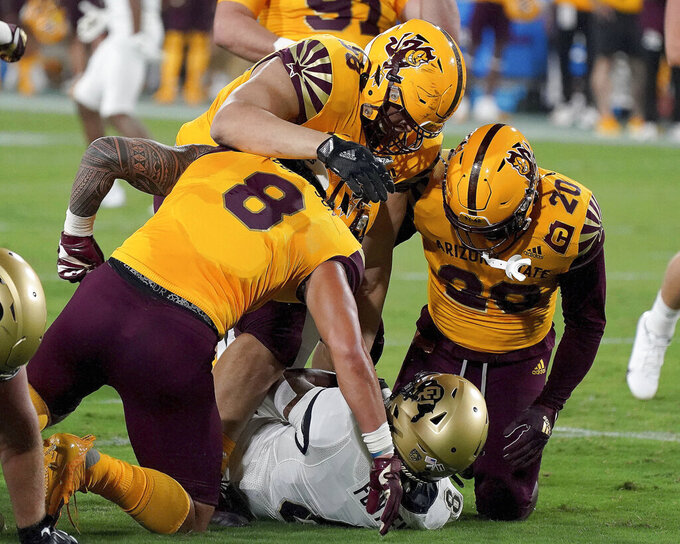 TEMPE, Ariz. (AP) — Rachaad White said there were times that Colorado's defense was loading the line of scrimmage on Saturday night, daring Arizona State to beat them with throws downfield.

Jayden Daniels and the Sun Devils were happy to oblige.

Daniels threw for 236 yards and ran for two touchdowns, White added rushing and receiving touchdowns, and Arizona State beat Colorado 35-13 in the Pac-12 opener for both teams.

“It was great the passing game got going,” White said. “Everyone got in rhythm. If they want to stack the box, then we trust the receivers. We did some key things this week to fix things up and Jayden led that group.”

Arizona State (3-1, 1-0 Pac-12) bounced back from last week's loss to BYU that caused the program to drop out of the AP Top 25. The Sun Devils never trailed, controlling the flow of the game with steady offense and solid defense.

Daniels capped Arizona State's scoring with a 15-yard touchdown run. He completed 18 of 25 passes (72%) and also ran for a team-high 75 yards.

It was a cleaner game for the Sun Devils, who were called for 16 penalties in the BYU loss. Arizona State outgained Colorado 436 yards to 250.

“Hopefully, we learned a lesson,” Sun Devils coach Herm Edwards said. “We got better this week.”

Colorado (1-3, 0-1) made it close for a few minutes, cutting the deficit to 14-10 early in the third quarter by scoring its first touchdown in more than nine quarters. Alex Fontenot powered through for a 1-yard score on third down.

But Arizona State responded with its own impressive drive, needing just six plays to move 71 yards downfield and make it 21-10. Freshman Elijhah Badger capped the drive with a 17-yard touchdown run, using a convoy of blockers to score for the first time in his college career.

“We've got to just keep bringing this team along,” Colorado coach Karl Dorrell said. “There's a lot of young players playing, a lot of new players, and it's challenging every week.

"We have to keep working, get better and hopefully that light bulb starts to get a little brighter."

White had an 11-yard touchdown run midway through the second and Arizona State took a 14-3 lead at halftime. Colorado's Cole Becker made a 51-yard field goal 13 seconds before the break, snapping the team's scoreless streak that stretched more than 120 minutes of football.

Colorado had one of its worst offensive performances in school history last week, gaining just 63 total yards in a 30-0 home loss to Minnesota. The Buffaloes moved the ball a little better against the Sun Devils but couldn't find the end zone in the first half.

Becker's long field goal gave Colorado some momentum heading into the break. The Buffs responded with the early third quarter touchdown, but couldn't keep it going.

“Brendon played OK,” Dorrell said. “He had a couple steps of progress this week. We need to continue to bring him along with our passing game. I thought he hit some opportunities for some throws and a couple receivers dropped the ball.”

Colorado: It was still a struggle on offense for the Buffs, but they did show a little improvement in the second half. Colorado is painfully one-dimensional and the passing game has to improve if it wants to pull off some wins in conference play.

Arizona State: The Sun Devils had a nice bounce-back game, improving offensively as the game progressed and Daniels had a turnover-free performance. A much tougher test comes next week when they travel to face UCLA.

Arizona State looked solid in its win but would have to leapfrog several teams to get back into the Top 25.