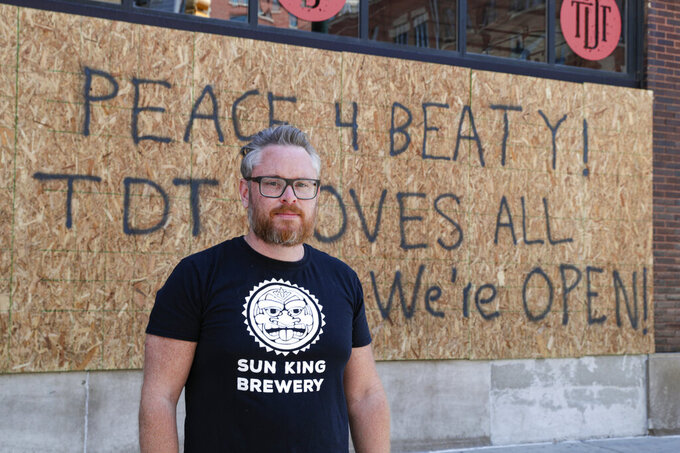 Restaurant owner Michael Cranfill poses in front of sign on the restaurant's boarded up windows in Indianapolis, Tuesday, June 2, 2020 to honor his friend former Indiana University football player Chris Beaty. Beaty was one of two people fatally shot in Indianapolis during protests over the death of George Floyd.(AP Photo/Michael Conroy)

INDIANAPOLIS (AP) — To those who knew former Indiana University football player Chris Beaty, it was no surprise that he would participate in a protest over the death of George Floyd.

That a man they saw as a “gentle giant” who brought positivity everywhere he went would turn up dead in an alley after a peaceful demonstration turned violent was unfathomable.

“He promoted peace and understanding and love every way that he could,” said Michael Cranfill, a restaurant and craft beer taproom owner. “He is someone, I think, who would take every opportunity he could to bring people together.”

Beaty's body was found Saturday night not far from his apartment, one of two people fatally shot after violence erupted during an Indianapolis protest.

The death of the man who was known as Mr. Indianapolis because of his unwavering support and enthusiasm for the city was just one of several in the U.S. during a week of protest and unrest since Floyd died May 25 after a white Minneapolis officer pressed his knee into his neck for several minutes even after the handcuffed black man stopped moving and pleading for air. Others slain include a Louisville, Kentucky, restaurant owner who was shot by authorities trying to disperse a crowd; a federal officer in Oakland, California, who was shot at a courthouse by someone in a passing vehicle; and a man shot outside a pawn shop in Minneapolis.

Police in Indianapolis did not release details Tuesday of Beaty's slaying.

Arely Elrod said she met Beaty about a decade ago through mutual friends who would attend local events together.

“He was so selfless and always so positive,” said Elrod, who owns a cleaning service. “He felt like there was always a need in a time of hatred. He was always the one to make sure he made a difference.”

Beaty, 38, graduated from Indianapolis Cathedral High School and played defensive lineman at Indiana University from 2000 to 2004. Since then, he had become a business owner in Indianapolis.

“The news of the passing of Chris Beaty is just devastating,” Indiana head football coach Tom Allen said in a statement. “Since I returned home to coach at Indiana, Chris embraced me, encouraged me and supported me! His passion for life and Indiana Football energized me every time we were together.”

The school said Beaty had been president of Fresh Marketing LLC. A May 4 post on Beaty’s Facebook page said that he and his team had created a reusable and washable cloth facemask with a filter for people to use during the coronavirus pandemic.

“As the realization that life is changing set in from sitting on the couch during quarantine, I figured out a way to be proactive and help people during these COVID-19 times,” the post read. “If you’re going back to work and looking for a solution to your ‘new normal’ please keep us in mind.”

Beaty also owned and operated nightclubs and recently sold some of his businesses, said Cranfill, who added that when he opened his own restaurant in downtown Indianapolis Beaty asked how they could work together to grow the community.

“He was a gentle giant, the kind of guy that would just draw you in with his energy,” said Cranfill, 37. “He had the most amazing smile, would give you a big hug. He exuded care for his community — someone who brought everyone together.”

Cranfill called Beaty a leader, not just for African Americans in the community, but for all of Indianapolis.

“I prayed and said, ‘Let his memory be the unifying moment to stop this violence, for us to come together, lay down our differences and for people to begin to heal and hear each other,’” Cranfill said.