At home: Sam Noyer returns to Colorado with chance at QB job 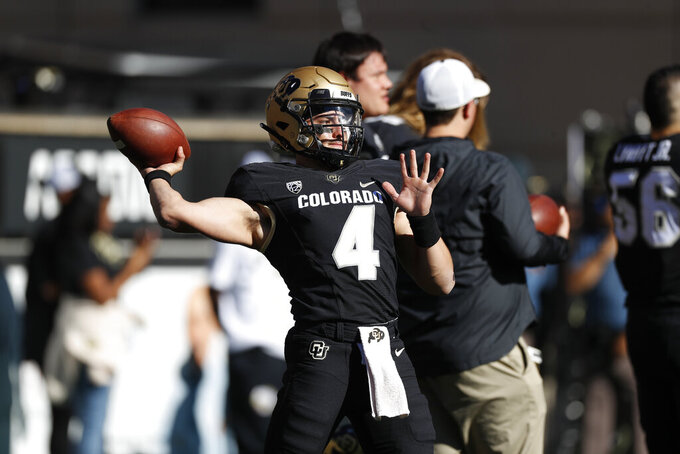 FILE—Colorado quarterback Sam Noyer warms up before an NCAA college football game Saturday, Nov. 9, 2019, in Boulder, Colo. Noyer, who left the university in search of a chance to quarterback a team, has returned to Colorado to vie for the first-string play caller position after a call from the university's new football coaching staff. (AP Photo/David Zalubowski, File)

Sam Noyer packed up his stuff in December and departed Colorado for what he thought was the last time.

His driving ambition: To be a starting quarterback somewhere after the Buffaloes converted him to safety last season.

Noyer's winding road led him right back to where he began.

Re-recruited by a new coaching staff, the senior returned to Boulder and is in the mix to be under center. He's locked in a tight competition with junior Tyler Lytle for the starting job against UCLA on Nov. 7, when the Pac-12 finally opens a season delayed by the COVID-19 pandemic.

“If you would’ve told me I would come back here for this last season, I would’ve said you’re crazy,” said Noyer, who entered the graduate transfer portal after earning his degree in strategic communication in December. “But now it’s the perfect opportunity.”

This time, the situation feels even more like a bona fide quarterback competition.

In years past, Noyer was going against some heavyweights in Sefo Liufau (during Noyer's redshirt season) and then Steven Montez. Liufau and Montez turned in prolific careers while at Colorado.

But he did earn this particular distinction: Becoming the sixth player at Colorado since 1965 to letter at quarterback, switch positions and earn another letter at his new position.

Still, he wanted another shot under center.

“My heart has always been at quarterback,” said Noyer, who was a top prospect out of Beaverton High in Oregon as he threw for 2,801 yards and 28 touchdowns his senior year. “That’s where I’ve felt most comfortable, is throwing the rock. I’m very comfortable at this position.”

After the season/graduation, Noyer returned home to Oregon so he could explore his options. He worked out and visited some possible landing spots.

In February, Tucker bolted for Michigan State after one season in Boulder.

Once Karl Dorrell took over the program, passing game coordinator/QB coach Danny Langsdorf reached out to Noyer along with offensive coordinator Darrin Chiaverini.

“It was the perfect opportunity for me to come back here and compete for the job,” Noyer said. “I’ve had a chip on my shoulder ever since I moved to safety and decided to come back. I’m going to earn everything. I don’t want anything given to me."

The competition is fierce to take over for Montez, who amassed a school-best 10,609 yards of total offense over his career before becoming a member of the Washington Football Team's practice squad. His total surpassed that of Liufau (10,509, 2013-16).

“Learning underneath those two guys has really helped me,” the 6-foot-4, 220-pound Noyer said. “They've given me a lot of advice.”

Lytle was one of the backups last season, seeing action in three games and throwing one pass. Freshman Brendon Lewis also is making a strong case to start. He's a highly touted dual-threat prospect out of Melissa, Texas.

Noyer has logged time at quarterback for the Buffaloes, completing 21 of 41 passes for 179 yards and two interceptions in ‘17 and ’18. He's also using what he learned in his role as a defensive back to gain an edge.

“Now that I know the mindset of defenders, and the overall grand scheme of things, it definitely helps me,” Noyer said. “I can tell a big difference in recognizing coverages and recognizing tendencies and techniques they are using.”

Langsdorf has familiarity with Noyer given the longtime coach's ties to the state of Oregon (Langsdorf was the offensive coordinator/quarterbacks coach at Oregon State from 2005-13).

“We’re glad he’s back and with us. We’re excited,” said Langsdorf, who was brought on board by Dorrell on March 4. “He hasn’t missed a beat in terms of the quarterback part of his job.”

Noyer, who turned 23 last week, anticipated being in this kind of QB race — just maybe not in Boulder.

“I’m loving it," Noyer said. "There’s a reason why I came here in the first place. I invested a lot of time and built a lot of relationships over the years. It felt like I was coming back home.”